Huge congratulations to the spirits and users who won awards this year!

Over 200,000 Tastes were logged in Distiller this year, but these bottles rose above the rest. To be eligible to win a spirit must have debuted in 2019 and have at least 50 Distiller user ratings. Unlike last year, this year we’re recognizing the top five spirits regardless of spirit category.

These ratings counts and average ratings are current at the time of posting.

One of the five members of the Buffalo Trace Antique Collection, George T. Stagg Bourbon just barely snuck into contention this year with 51 ratings. This bottle didn’t hit shelves until Fall of 2019, and just like its siblings is incredibly hard to find and even harder to afford, which explains the relatively low ratings count so far.

Named in honor of actor Nick Offerman, a long time spokesman for Lagavulin, this release didn’t start hitting shelves until October 2019. This 11 year peated single malt scotch is bottled at 46% ABV and is a collaboration between Offerman and Lagavulin Distillery Manager Colin Gordon. Offerman also helped with the bottle design which bears his portrait and signature.

Wild Turkey Master’s Keep Cornerstone Rye is the first rye whiskey that Wild Turkey has included in the Master’s Keep line. The brand did not put an age statement on the bottle but did disclose that the whiskey is at least 9 years old with some 11 year included. Only 15,000 bottles of this rye were produced, and it didn’t hit shelves until August 2019.

The only non-whisk(e)y to make the top 5 this year, Hendrick’s Midsummer Solstice is a limited edition release that hit the UK in March 2019 and the US in May 2019. This gin was created by master distiller Lesley Gracie and is infused with “natural floral essences”.

Congrats to all of the spirits that took home spots in the top five this year. On to the user awards!

Every year we celebrate Distiller’s biggest year yet, and 2019 was no exception. With hundreds of thousands of Tastes created and millions of users coming to the platform, it’s a pretty special thing to be amongst the top users.

This year we saw some newcomers take the top spots, as well as some familiar faces from the past few years holding onto their crowns. 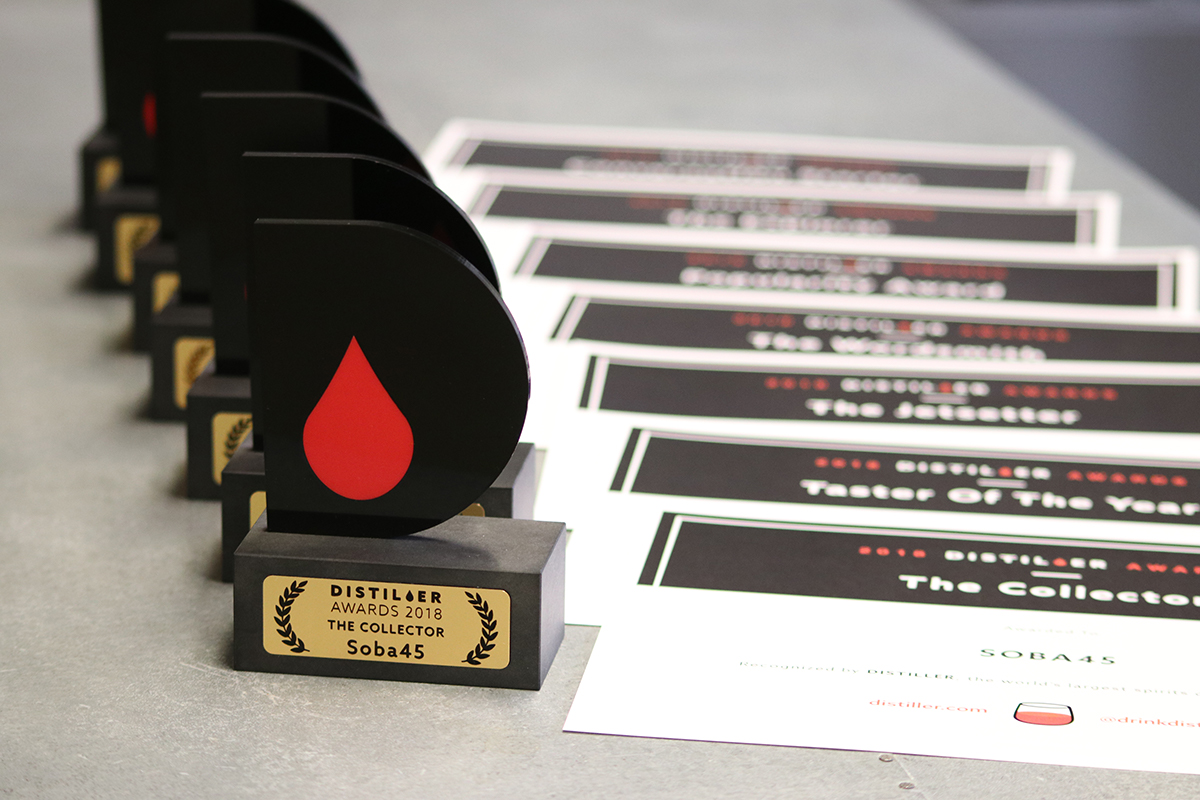 The Distiller User Awards Trophies from 2018. Updated versions will be sent out this year.

Taster Of The Year: magicalpoet

Magicalpoet joined Distiller this year and in that time was able to amass a whopping 622 Tastes. That’s a new record for Distiller. Congratulations magicalpoet!

Members of the Distiller community are very familiar with the name PBMichiganWolverine. He’s been with the community for many years and his name shows up in threads across hundreds of spirits every year as he discusses Tastes with his fellow tasters. This year he posted nearly 2,000 different comments. Incredible!

The Wordsmith this year is a long time Distiller community member, but first time winner. This year cascode took home this prize, which is a tough one to win. This award goes to the person whose Tastes had the most words. Cascode wrote nearly 56,000 words in his Tastes this year. Be sure to follow him!

Dubz480 won this award last year, and it seems he was unwilling to give up his crown. This award goes to the person who tagged the most unique locations in their Tastes in 2019. This is also the first time dubz480 has won two awards in one year. Let’s see if he can go for a ‘three-peat’ next year.

Another repeat winner this year is Soba45 who added the most bottles to the Distiller platform in 2019. We can’t review everything, and some of the people using Distiller get their hands on truly remarkable stuff. Thanks to Soba45 for all of the amazing contributions to the database this year.

And that’s it! Congratulations to all of our winners. Thank you for your amazing contributions this year. We can’t wait to see who takes home the awards next year.