For decades, Maker’s Mark was known for the consistency and quality of a single marquee product. Now, ten years after the release of Maker’s Mark 46, the brand’s first-ever addition to the product line, comes another first. With the release of the 2020 Maker’s Mark Wood Finishing Series, the brand has debuted its first bourbon incorporating multiple components. Therefore, the release required a blender’s deft touch.

Of course, when creating any product where consistency is the name of the game, including the standard Maker’s Mark, each batch incorporates a careful mix of different barrels. That includes selecting different maturation lengths from different areas of different warehouses in order to achieve that fine-tuned end result. Such a batching process is therefore an example of blending. However, all of the juice in the barrels is the same.

“We marry barrels and we have formulas for standard Maker’s,” explains Maker’s Mark Director of Innovation Jane Bowie. “But this was entirely different. It was fun to get into a different mindset this year. It’s something that’s still Maker’s to its core, but flexing a different part of it.”

With each year’s release of the Wood Finishing series, a particular process and resulting flavor is targeted as a standout. “It’s about amplifying key things in Maker’s,” Bowie says. For instance, the goal for the 2019 Limited Edition RC6 release was to accentuate bright fruit flavors derived from the fermentation process. 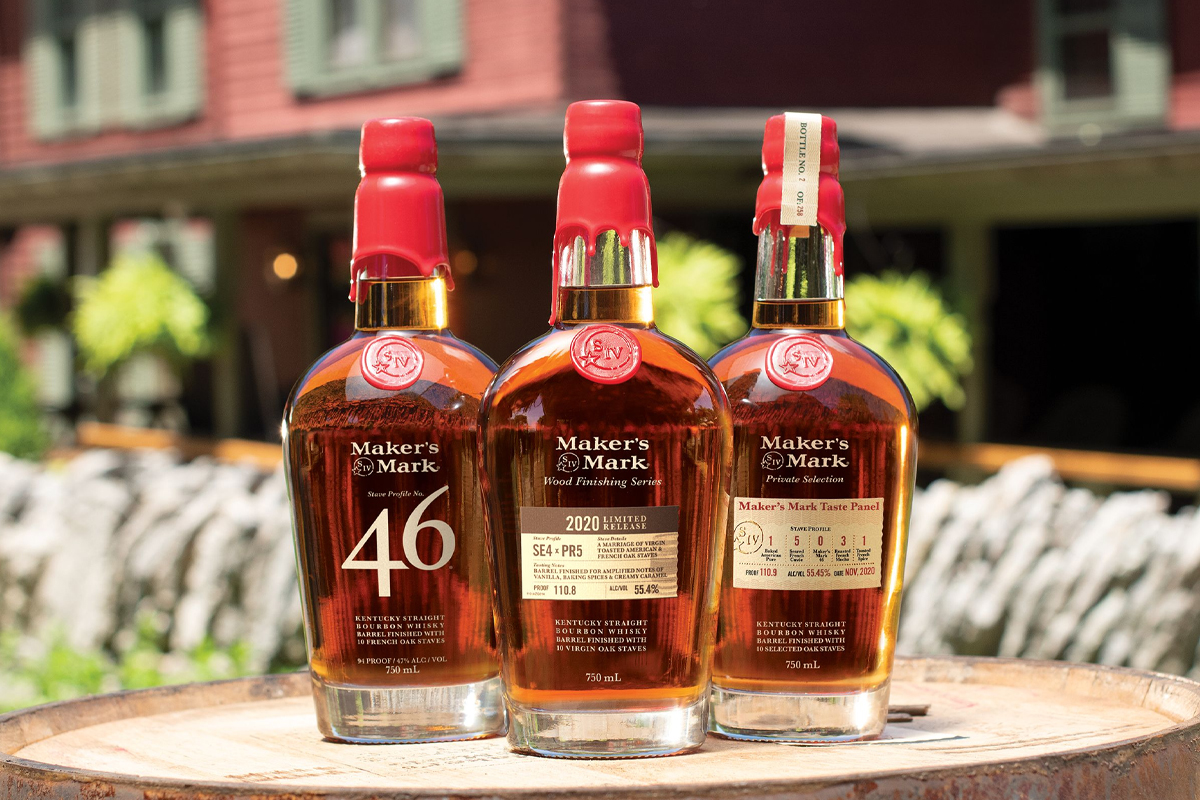 The goal for the 2020 Maker’s Mark Wood Finishing Series then was to emphasize the vanilla and caramel notes derived from the use of the wood seasoning process. In this case that means the staves selected were naturally air-seasoned for 12 months. “We wanted to create a whiskey which celebrated the seasoning we do,” Bowie says.

On the journey towards the creation of this release, Bowie has overseen approximately 125 different experiments over the past several years in conjunction with Independent Stave Company. “It’s been all about wood,” she says. “I want to take the Maker’s that I love and tweak it.”

To successfully make those tweaks and achieve the desired end result, the distillery would be utilizing the signature stave finishing process that Maker’s uses for all of its innovations. What’s unique here, though, is that this release is a blend of three different components, including two different staves. “This is new to us,” Bowie says. 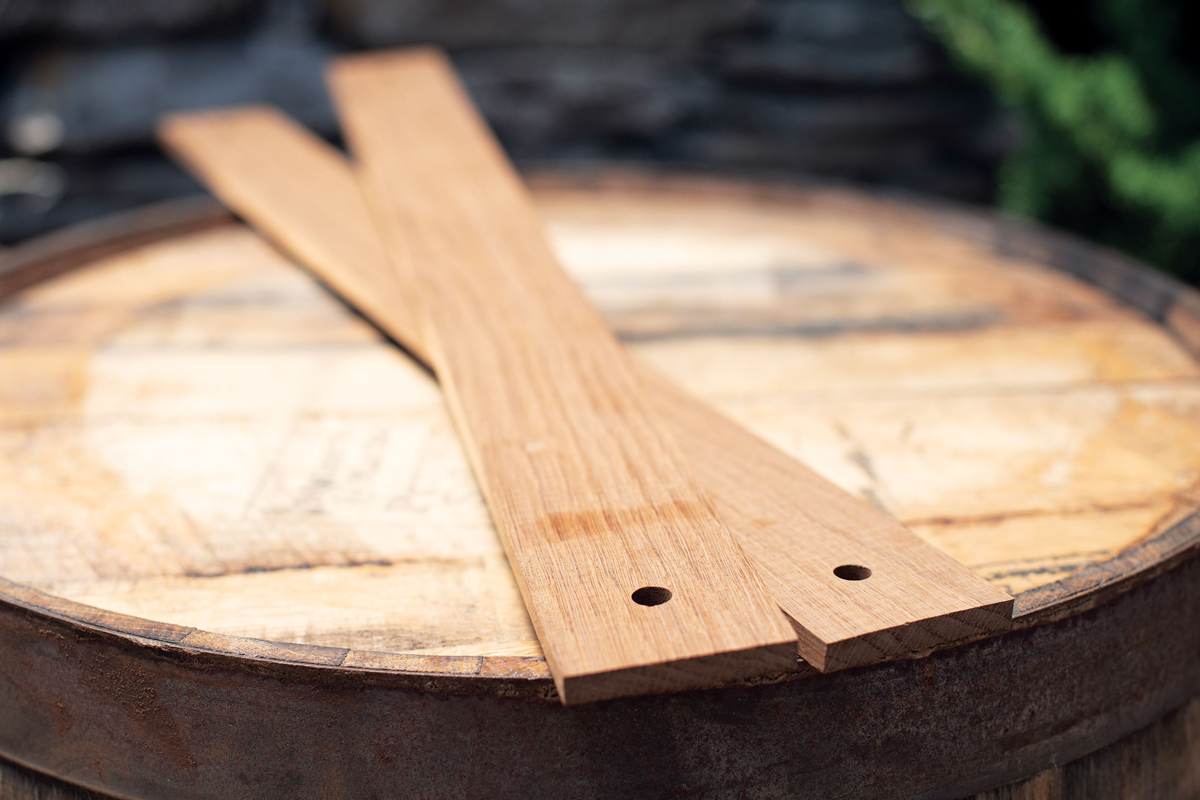 It wasn’t the initial intention, either. Bowie began the project envisioning the use of one stave to bring the vanilla and caramel to the forefront. Instead, it took two. “This project has been harder than we anticipated,” Bowie says. “We thought it would go one way and went another.”

The trick was finding the exact right time that each component peaked in the ideal flavor range. And between the different staves, and different finishing lengths, Bowie was finally able to bring that to life. “There was a lot, a lot of tweaking,” she says.

One of the staves, dubbed SE4, is virgin French oak convection-cooked at medium heat with a short toast period. It is responsible for two of the three components, with the goal of highlighting caramel. The only difference between the two was the length of the finishing process — one finished for five weeks, and the other finished for six weeks. “It’s amazing what one week can do,” Bowie says. 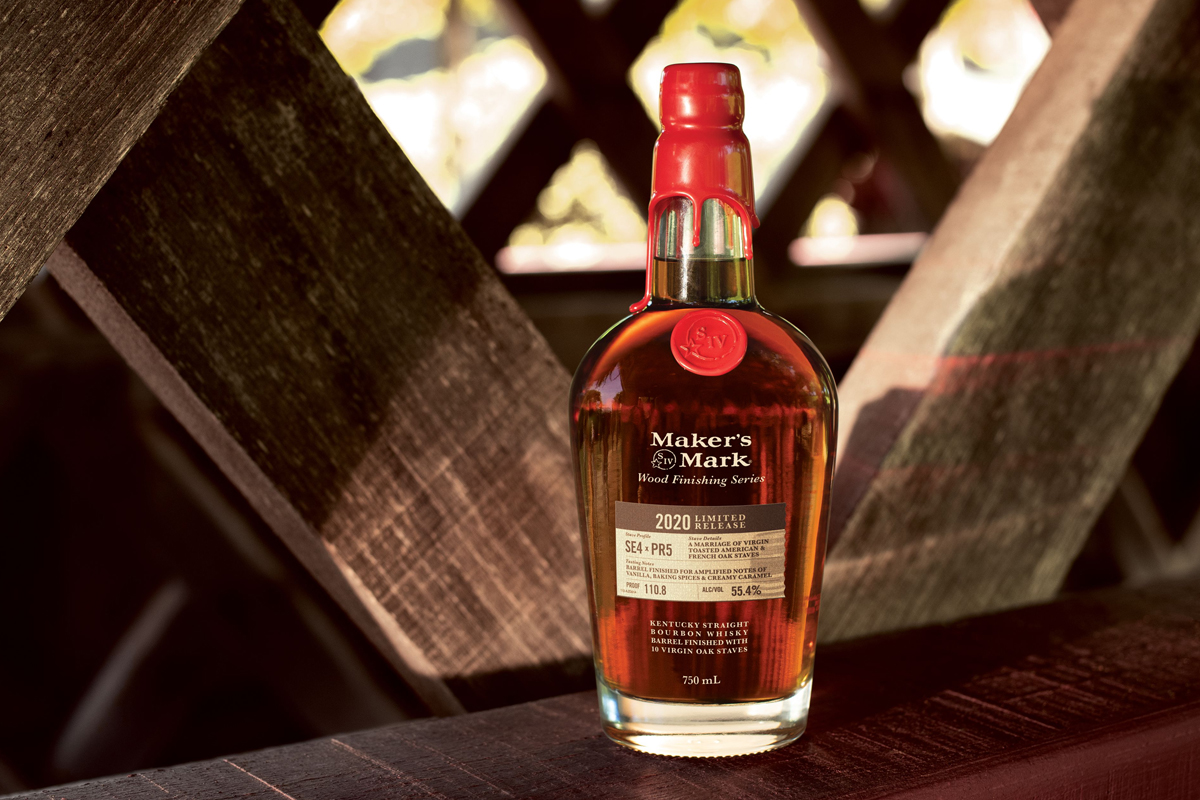 A taste of the components used in the blend revealed as much. One showcased the spicy characteristics of the French oak, with notes of incense, while a switch was flipped with the difference of a week. The other delivered far richer, caramel-centric tones. Interestingly, with just one further week still, the finish had already gone too far. In tasting a trial component which was not used in the final blend — the same stave but now at seven weeks — an astringent quality had set in, designating a point of no return.

The second stave variety is designated PR5. It features virgin American oak that has been convection-cooked slow and low to bring out and maximize notes of vanilla. It’s the largest component of the three in the final blend. Indeed a standalone taste of this liquid revealed vanilla and vanilla extract, along with a contribution of spearmint.

The marriage of the three components was then proofed to 110.8 and voila, the 2020 Maker’s Mark Wood Finishing Series was finalized. “I rarely lose sleep over work, but this one kept me up at night,” Bowie jokes. She’ll be pleased to know then that the final product delivered on its stated goal. At the same time, the process allowed the distillery to wander down a road which heretofore was not only the path less traveled, but one which it had never before even stepped upon.

Ready to try the 2020 Maker’s Mark Wood Finishing Series for yourself?