Distiller in 2016: A Look Back at a Most Spirited Year

Back at the end of 2013 a tiny little whiskey reviewing website launched. A few hundred people signed up for our email list. You couldn’t do much with it besides look at what a handful of spirits reviewers had rated a laughably small group of whiskeys. I think when we launched, it had about 85 whiskeys reviewed. Impressive, I know. Back then you couldn’t create an account, or leave tasting notes, or rate whiskeys yourself. You couldn’t add anything to your wishlist, or keep track of your collection. Still, people liked it. It looked nice, it worked on your phone, and it showed potential. So we decided to keep going. Now three years later what used to be a tiny little whiskey reviewing website is the most downloaded and used spirits app on earth. If I didn’t need both of my hands to type this, I’d be pinching myself.

We’ve grown this much because of your interest, feedback, suggestions, and the fact that you share Distiller with your friends and family. Please keep doing it, the more we grow, the better we can make the app and website.

Now that 2016 is drawing to a close, we wanted to share some of the fun and exciting data we’ve collected over the course of the year! Let’s take a look at Distiller in 2016…

The United States is our biggest market, and it accounts for a huge amount of our overall usage, but we knew from our data over the years that tastes and preferences vary drastically from state to state. We took a deeper dive and looked at the most viewed spirits by state in 2016! 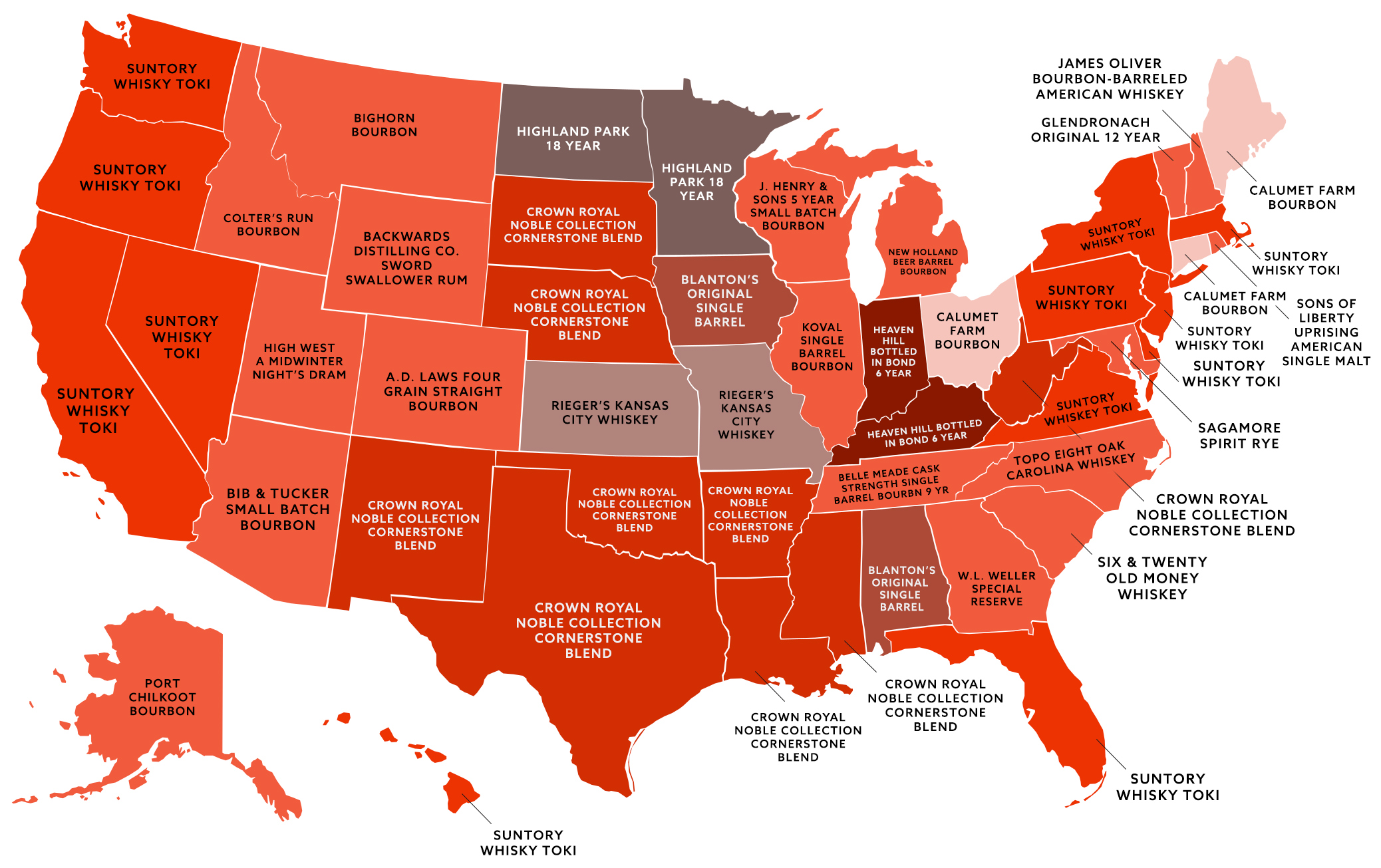 Most Viewed Spirits By State in 2016

It would appear that it was a battle between two brand new whiskies that made their debuts in 2016 to see who could own the hearts and minds of the American public. Suntory Whisky Toki and Crown Royal Noble Collection Cornerstone Blend both dominated huge swaths of the country. It’s also really exciting to see regional spirits being so heavily favored by their home states.

Outside of the United States, international drinkers were busy as well. Canada and Australia are huge and growing markets for us, as well as countries across Europe and Asia. Take a look at the most viewed spirits across our top 11 biggest ex-US countries! 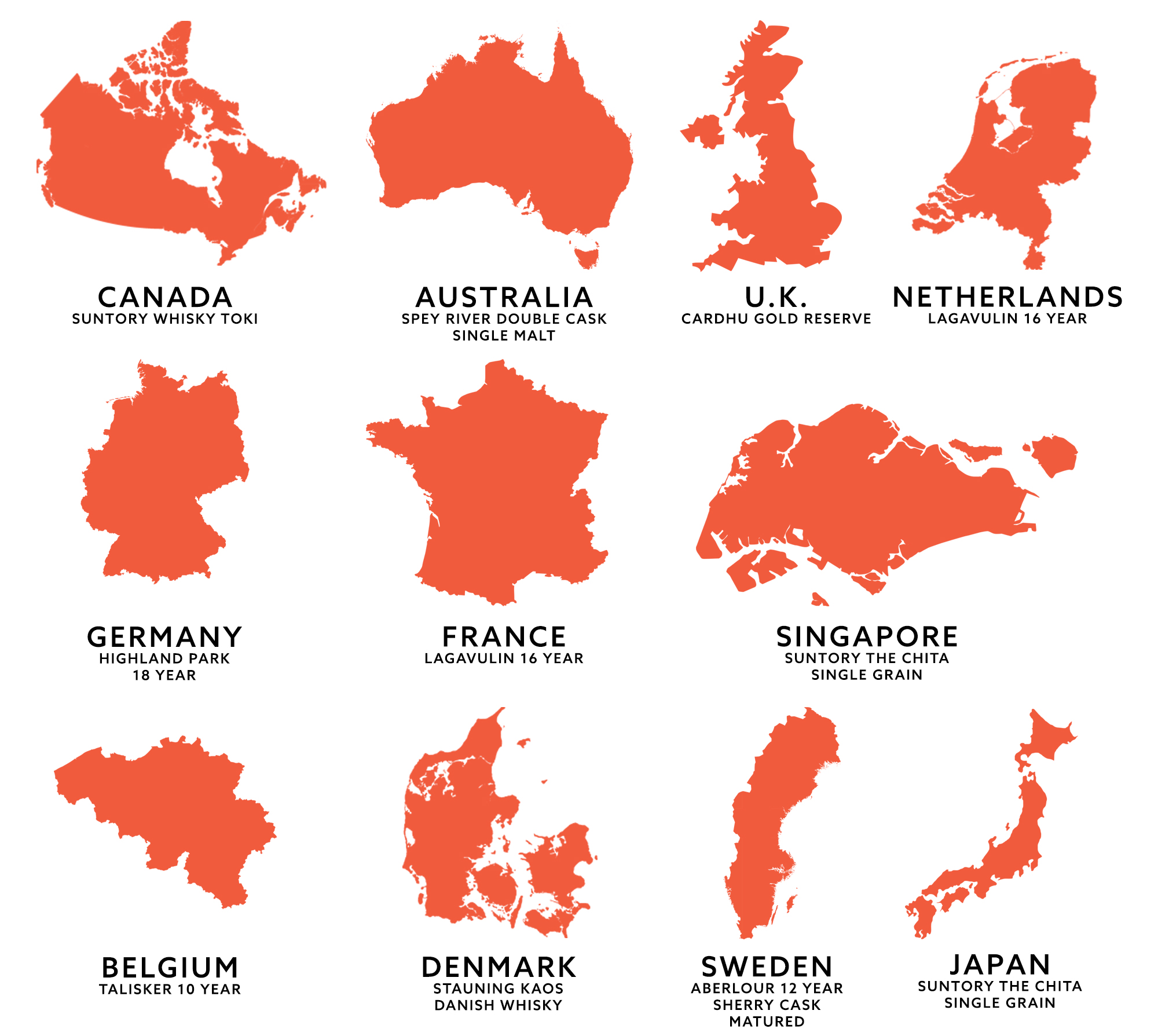 Most Viewed Spirits By Country in 2016

Whiskey is where Distiller started, and it’s no wonder that both internationally as well as in the United States, whiskey is king.

Every year we’ve seen the app grow, but absolutely nothing like this year. Our monthly search totals have gone through the roof, people are viewing, rating, and leaving tasting notes more than ever, and our monthly users have increased by 150% year over year. What does that all boil down to? Well, a lot more data for one thing!

How many spirits searches? More than 7.5 Million!

But what about the top spirits of the year? The ones that Distiller users from almost every country on earth were looking at (seriously, why isn’t anybody using Distiller in North Korea or Tajikistan? We’re blowing it!) Take a look at the most viewed, wished for, and collected spirits of the year!

The Most Viewed Spirits of 2016

These three spirits were viewed more than any others from users all around the world this year.

The Most Wished For Spirits of 2016

These three spirits were wished for more than any others from users all around the world this year.

The Most Collected Spirits of 2016

These three spirits were added to collections more than any others from users all around the world this year.

And there you have it! We can’t wait to look back on 2016 a year from now when we’ve added even more spirits, more features, more users, and made Distiller even better. We couldn’t be more proud of how far we’ve come, and more excited for everything we still have to build. Keep your eyes on Distiller in 2017, we have some big things planned, and we can’t wait to share them all with you.

Cocktail of the Week: Take Me Anywhere