Distiller in 2018: Sipping Across The World

As the year draws to a close, we took the opportunity to dig into the data behind Distiller in 2018. We’ve been doing this for a few years now, but if you missed it, you can check out what 2017 looked like. Every year we’ve been continuing to grow at an exciting pace, and 2018 was no different. This year we introduced Tastes, quarter star ratings, adding locations and cost to your Tastes, a brand new Liqueur category and tons of other things. We saw more new users than ever before, and we reviewed more spirits than ever. In short, it was a whirlwind.

As always, thank you so much to everyone who has joined us at Distiller, created lists and bottles and shared your Tastes with us. We have even more exciting things in store for 2019, so keep an eye out!

Two years ago we were amazed by just how much of a splash Suntory Whisky Toki had made. Across both the east and west coasts, it was the most viewed spirit by a long shot. Last year the whisky made even more headway, breaking into states across the South and the Midwest. This year, however, other big names made a big push back. Toki lost ground, and in its place came Elijah Craig Small Batch, Henry McKenna 10 Year Bottled In Bond, Wayne Gretzky No. 99 Red Cask and even Proper No. Twelve Irish Whiskey.

Some states held onto their local state spirits like Texas, which has had 1835 Texas Bourbon as its top spirit for two years now. The same goes for Montana, which held on to Bighorn Bourbon as its most-viewed spirit for another year. Check out our map for 2018 and see where your state landed! 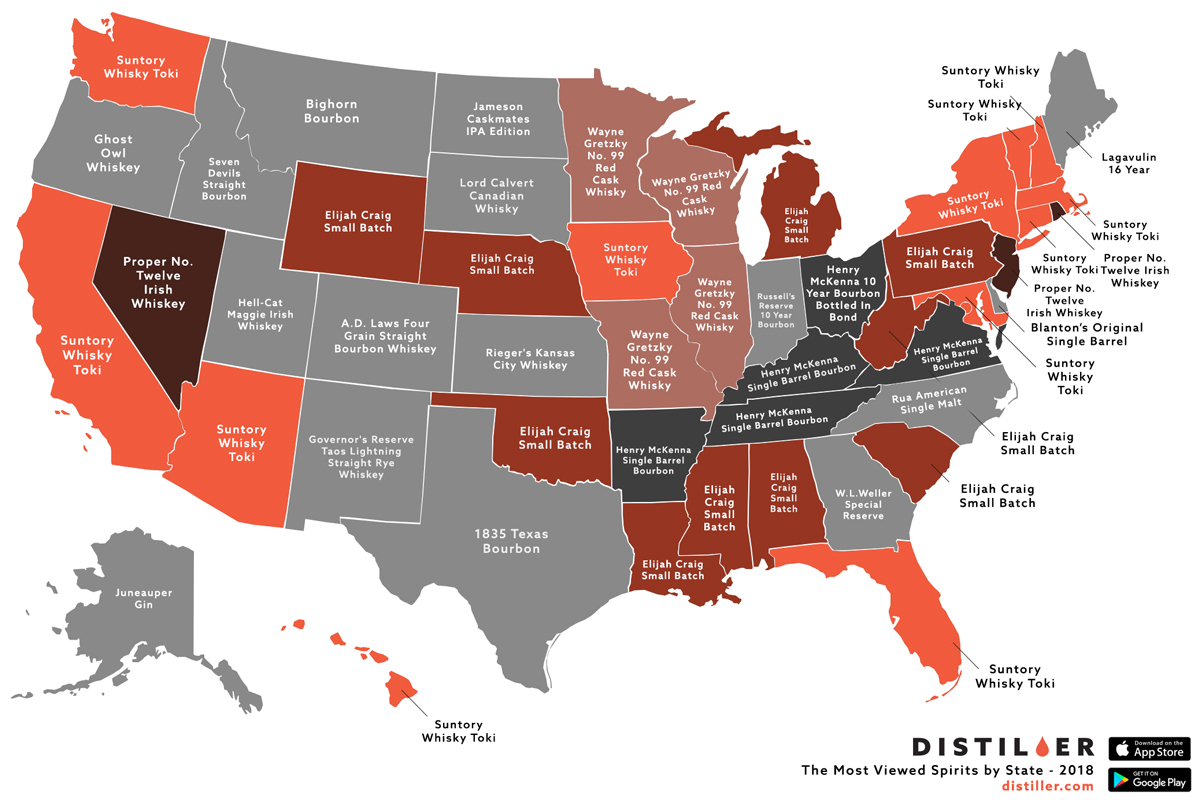 It’s always interesting to see where brand marketing has been most impactful. While Toki has clearly focused on the coasts, it seems that with the new redesign of Elijah Craig Small Batch came a concerted marketing effort across parts of the South and Midwest. Long an under-the-radar favorite of bourbon fans, it would seem that the word is finally out on Henry McKenna, which exploded in popularity out of Kentucky and surrounding states. Of course, we’d be remiss if we didn’t mention the impressive showing from Wayne Gretzky No. 99 Red Cask Whisky that has clearly invaded from the great white north.

Finally, it would seem that Conor McGregor’s Proper No. Twelve Irish Whiskey made a big impact in Nevada where marketing around the UFC was clearly effective.

While Canada, the United Kingdom and Australia remain our top three largest markets outside of the United States, other countries are on the move. India moved up to bump Germany out of the 4th spot, and Japan jumped from the 9th spot to the 6th. Mexico moved up to #10.

The Great One remained on top in Canada this year with No. 99 Red Cask, as did Australia’s own Starward Malt Whisky. In every other country, however, there was a new top dog. 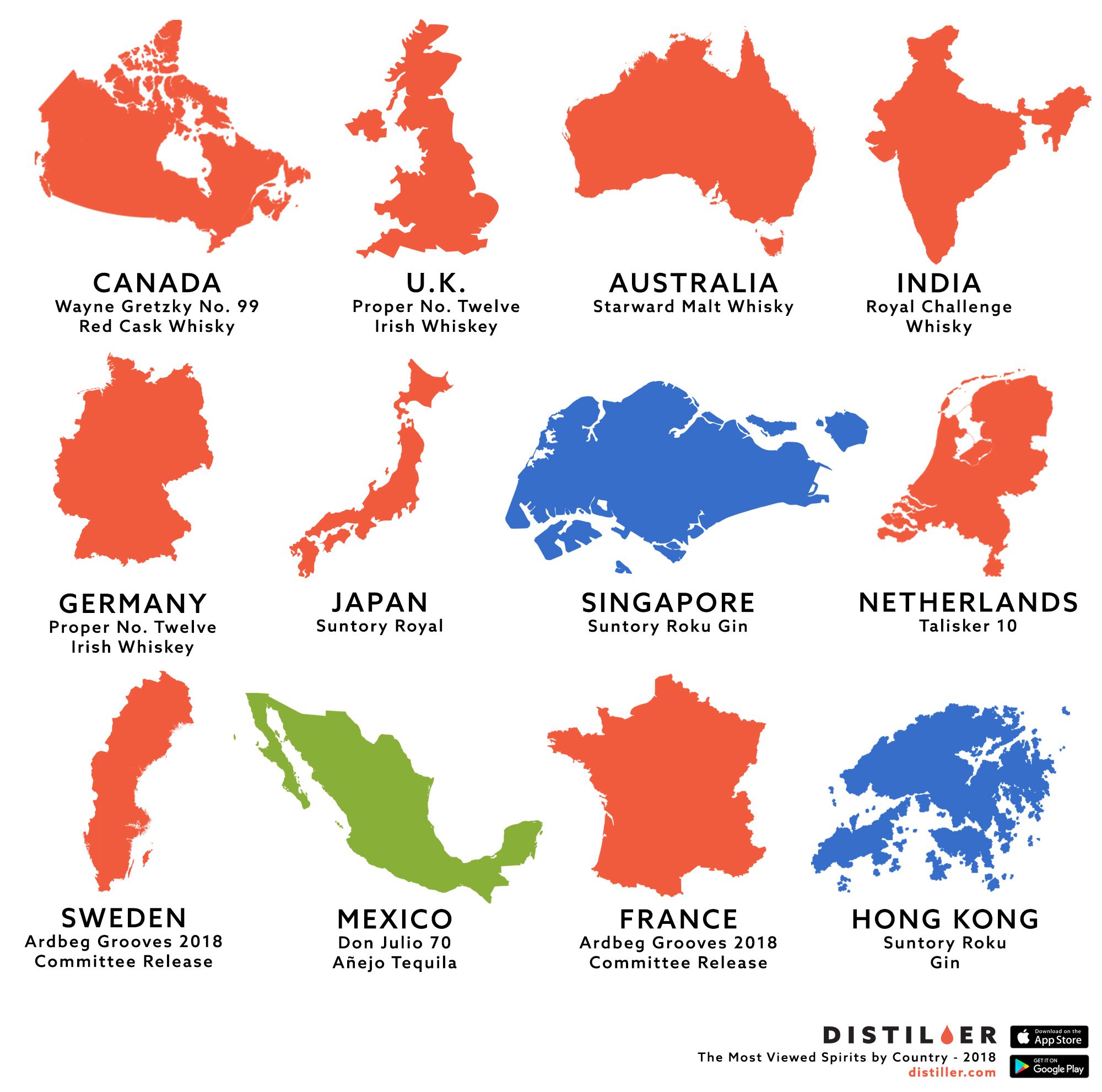 Many millions of people used Distiller in 2018, and hundreds of thousands of Tastes were created all over the world. People from Uzbekistan to Venezuela to Zimbabwe to Lithuania came to Distiller this year to view spirits, add to their lists and create Tastes.

Curious which spirits took home the top spots across the entire platform? Here we go!

Most Viewed Spirits of 2018

A bit of a re-shuffling here. Last year Lagavulin 16 took the top spot, now it’s down to #3, Blanton’s was #2, and Eagle Rare 10 Year was #3. All the same players, but different positions.

The Most Tasted Spirits In 2018

While Lagavulin 16 Year held on to the top spot, Eagle Rare 10 Year moved up from #3, Buffalo Trace Bourbon entered the top 3, and Laphroaig 10 Year dropped off the podium entirely.

Thank you to everyone who used Distiller in 2018 for contributing to the amazing community, sharing your Tastes with us, and always suggesting new features to help us constantly improve. If you thought 2018 was exciting, you’re going to love what we have in store for you in 2019.

From everyone here at Distiller, we hope you have a wonderful holiday season. Relax, sip on something delicious, and of course tell all your friends about the greatest spirits platform on earth: Distiller.

Farm to Glass Whiskey: Bourbon Straight from the Source