Every December since 2016 we’ve taken some time to lift the hood and take a deeper look at the numbers behind the Distiller platform. Check out what 2018 looked like if you missed it. We look at what people are tasting, what spirits they’re viewing, and how the popularity of different brands rises and falls over the course of the year. It’s always exciting to see how new features are used, where Distiller users are coming from and what people are tasting all over the world. It’s the last year of the decade, so let’s take a look at what was going on behind the scenes at Distiller in 2019.

This year, spirits in Distiller were viewed over 7 million times in the Distiller platform. A huge percentage of those views came from inside the United States, where whiskey and other spirits continue to expand in popularity at a breakneck speed.

Things have changed quite drastically across the United States over the past few years. Back in 2017, Suntory Whisky Toki absolutely dominated the map. Last year it still held onto some states, though it had lost quite a bit of ground. Shockingly, this year it was not the most popular spirit in any state within the United States. Instead, a newcomer emerged.

As suspicious as we often are of celebrity spirits, there’s a reason the large drinks companies so commonly back them. These spirits have built-in fan bases and can generate a huge deal of interest with the right spokesperson. That appears to be the case with this year’s clear leader: Proper No. Twelve Irish Whiskey, backed by Proximo Spirits. Conor McGregor’s Irish whiskey brand debuted at the tail end of 2018 and quickly made a splash. Last year it only grabbed the top spot in Nevada. Now, it’s dominating in most of the biggest states in the USA.

There was, however, another eyebrow-raiser this year. Henry McKenna 10 Year Bottled in Bond Bourbon expanded upon its gains last year by dominating not only Kentucky and Tennessee but building a path from the Great Lakes down to the Gulf Coast, and from as far west as Nebraska all the way to the Atlantic.

Check out our map for 2019 and see which spirit received the most views in your state! 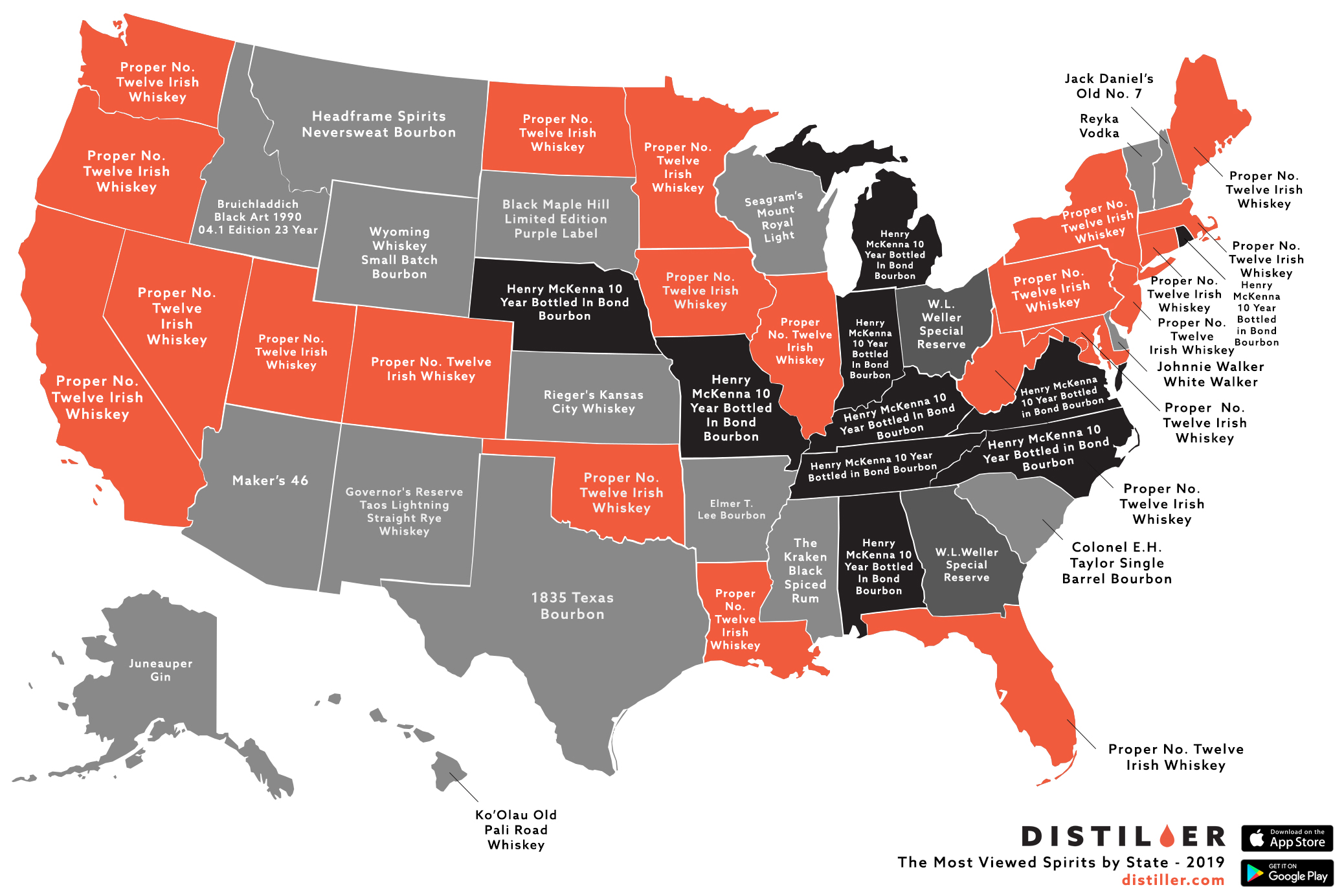 Want to support everything Distiller does while enjoying an ad-free experience on Distiller.com and in your Distiller app? Join Distiller Pro for only $10 a year!

The Drams Outside Of The States

It would seem that Proper No. Twelve Irish Whiskey wasn’t content to focus purely on the United States, as it also picked up the top spots in the UK, Australia, Sweden, the Netherlands, France and Ireland. Ireland joined Distiller’s Top 12 International markets for the first time, unseating Hong Kong, perhaps understandably.

Wayne Gretzky held on to the top spot in Canada with No. 99 Red Cask Whisky, and India, Japan, Singapore and Mexico all kept the same top spirits from 2018.

It will be interesting to see if something, or someone can unseat Proper No. Twelve in 2020. 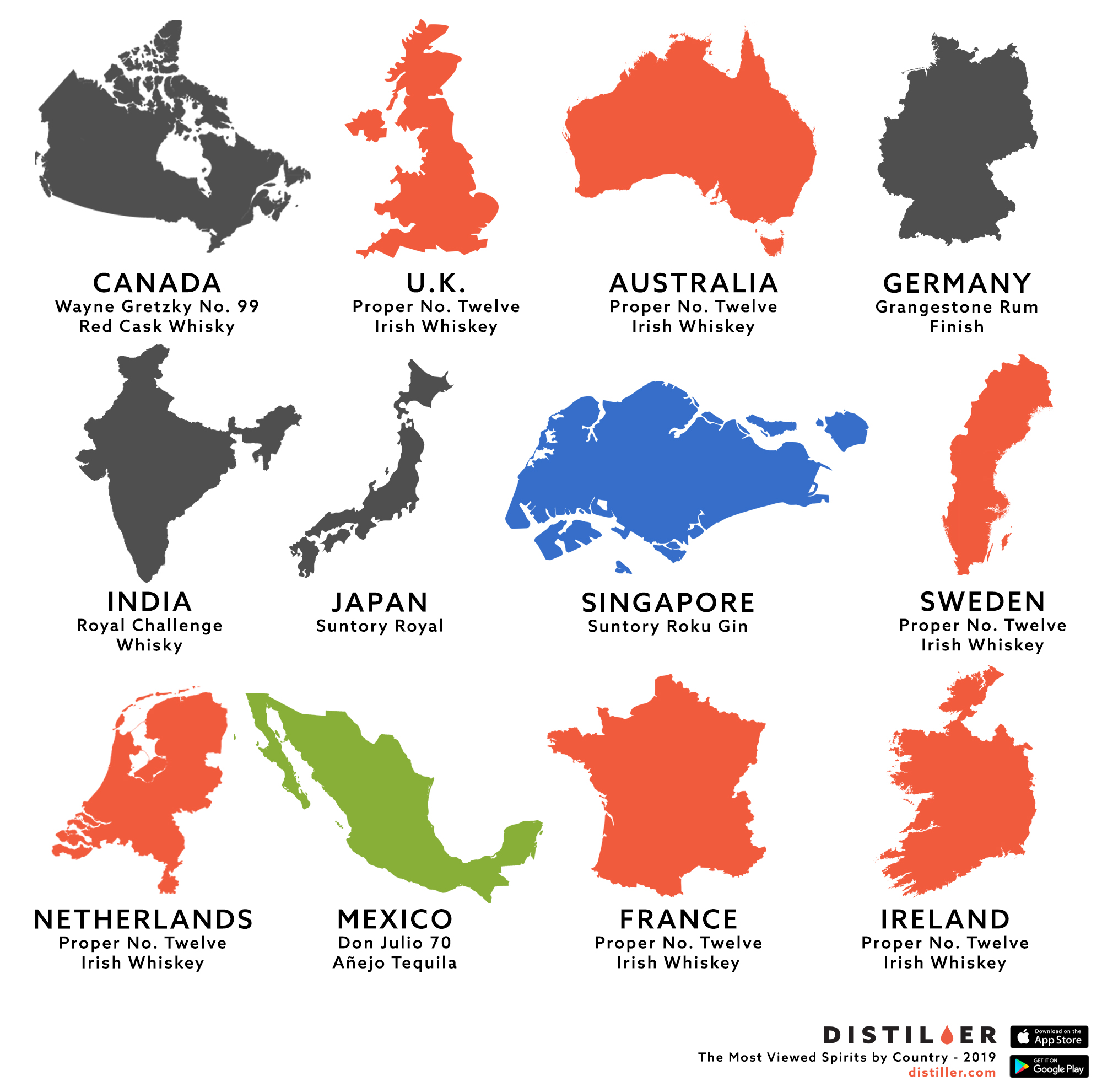 Millions upon millions of people visit Distiller every year, which is amazing. Not only that, but several hundred thousand Tastes are logged every year as well. Last year over 175,000 unique Tastes were entered into Distiller. This year there were more than 200,000. Additionally, members of the community created more than 5,600 unique spirits pages to include in our database.

While the United States remains our biggest country traffic-wise, there is no shortage of people from around the globe coming to Distiller to learn more about spirits. We wanted to check in on some of the other countries around the world, large and small, that don’t get talked about as much but still have plenty of dedicated Distiller members.

Finally, it’s always interesting to see which spirits racked in the most views across the world during the year. Perhaps unsurprisingly, they’re all whisk(e)y. What is surprising, however, is that not one of them was a Scotch whisky. The top five is made up of three bourbons, an Irish whiskey and a Japanese whisky. There are thousands upon thousands of Scotch whiskies in the Distiller database, but these five outdid them all.

And that’s it for the 2019 wrap up. Cheers to all of you who have come to Distiller.com or used one of our mobile apps this year. Every year more and more of you come, and every year we add new things for you to enjoy. Keep coming back, we can’t wait to share everything we have in the works for 2020. Happy holidays!

Mikael co-founded Distiller in 2013 and has lead the product and team behind it ever since. He began his career in the music industry working with some of the biggest artists on Earth. He left the industry in 2011 to pursue other interests and soon turned his interest in whiskey and other spirits into his full time career.

With Distiller, you’ll always know what’s in the bottle before you spend a cent. Rate, Review, and Discover spirits. Head on over to Distiller, or download the app for iOS and Android today! Want to enjoy Distiller ad-free? Join Distiller Pro today to support the Distiller platform and keep ads off of your screen.