Although technically fall doesn’t arrive for a few more days, for whiskey fans, fall is in full swing. Like clockwork, whiskey releases ramp up just after Labor Day and this year is no different—well, no different in this respect. For starters, this week brings word about the highly anticipated Buffalo Trace Antique Collection. Although the five whiskeys remain the same, the length of maturation and proof varies from year to year. Also announced this week was Parker’s Heritage Heavy Char Bourbon. This special collection from Heaven Hill honors the distillery’s late master distiller Parker Beam.

As for Scotch whisky releases, both Compass Box and The Balvenie have limited edition releases coming soon although one will cost considerably more than the other. Here’s a hint: it’s the one aged for 50 years! And Benriach is adding four new single malts to its core portfolio. We’ve got the details for these and other new releases below in Distiller’s Friday Roundup for September 11, 2020!

In case you missed the announcement earlier this week, Buffalo Trace has indeed released the details on its 2020 Antique Collection. The five whiskeys in this highly sought after collection include three bourbon releases: George T. Stagg, Eagle Rare 17 Year and William Larue Weller. The rye releases include Thomas H. Handy and Sazerac Rye 18 Year. Like previous years, these are extremely limited so check in with your favorite retailer as soon as you can. You can check out more details on the whiskeys in our post as well. 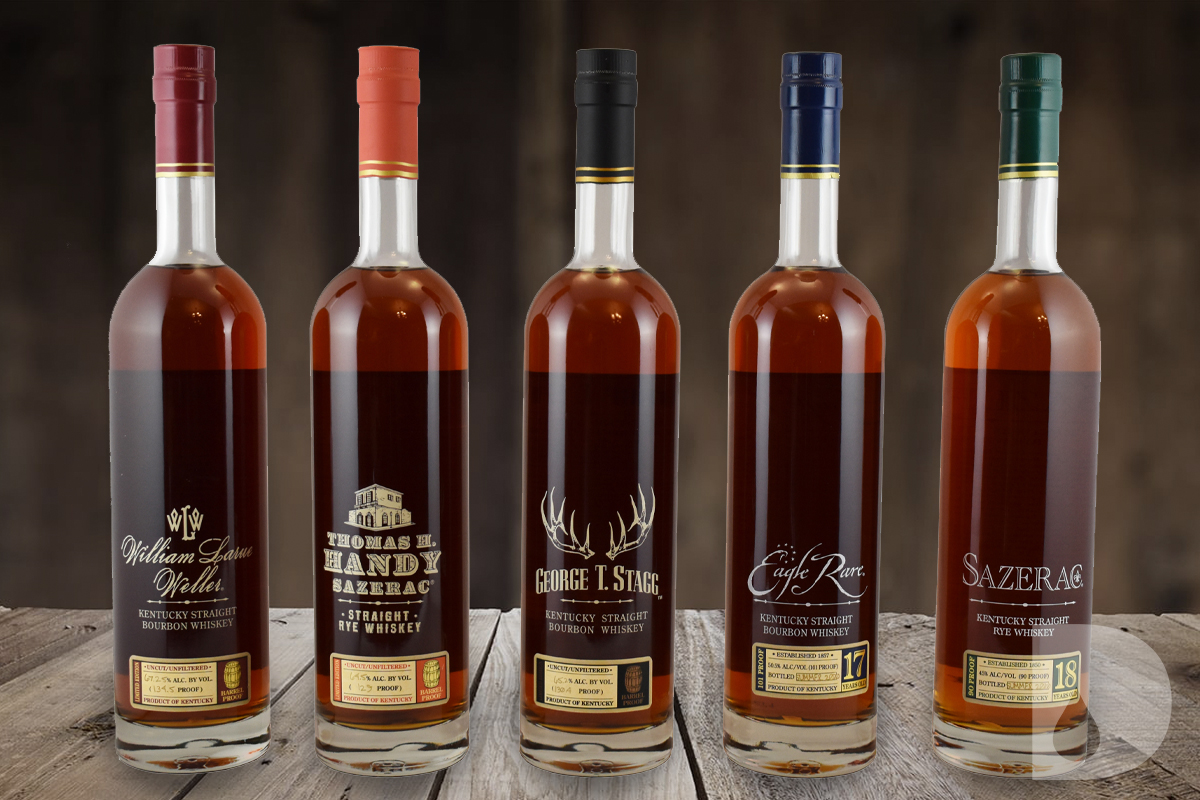 Parker’s Heritage Heavy Char Bourbon 10 Year is the 14th edition in this annual series from Heaven Hill named after the late master distiller, Parker Beam. This Heavy Char Bourbon release is made from a mash bill of 78% corn, 12% malted barley and 10% rye. The spirit is then filled into 102 barrels which were charred for 1 minute and 30 seconds making them a level 5 char. Typically the distillery uses level 3 char barrels which are charred for 40 seconds. Then the barrels were aged on the 6th floor of Rickhouse Y. After 10 years of aging, the bourbon was cut to 120 proof without chill filtration.

Parker Beam was diagnosed with Amyotrophic Lateral Sclerosis (also called ALS or Lou Gehrig’s disease) in 2010. Since the 2013 Parker’s Heritage Promise of Hope bottling through 2019’s Heavy Char Rye edition, Heaven Hill has raised over $1 million towards ALS research and patient care. Parker’s Heritage Heavy Char Bourbon continues this tradition with a portion of the proceeds of each bottle going to the ALS Association.

Parker’s Heritage Heavy Char Bourbon is available in limited supplies nationally beginning in October with an SRP of $120. 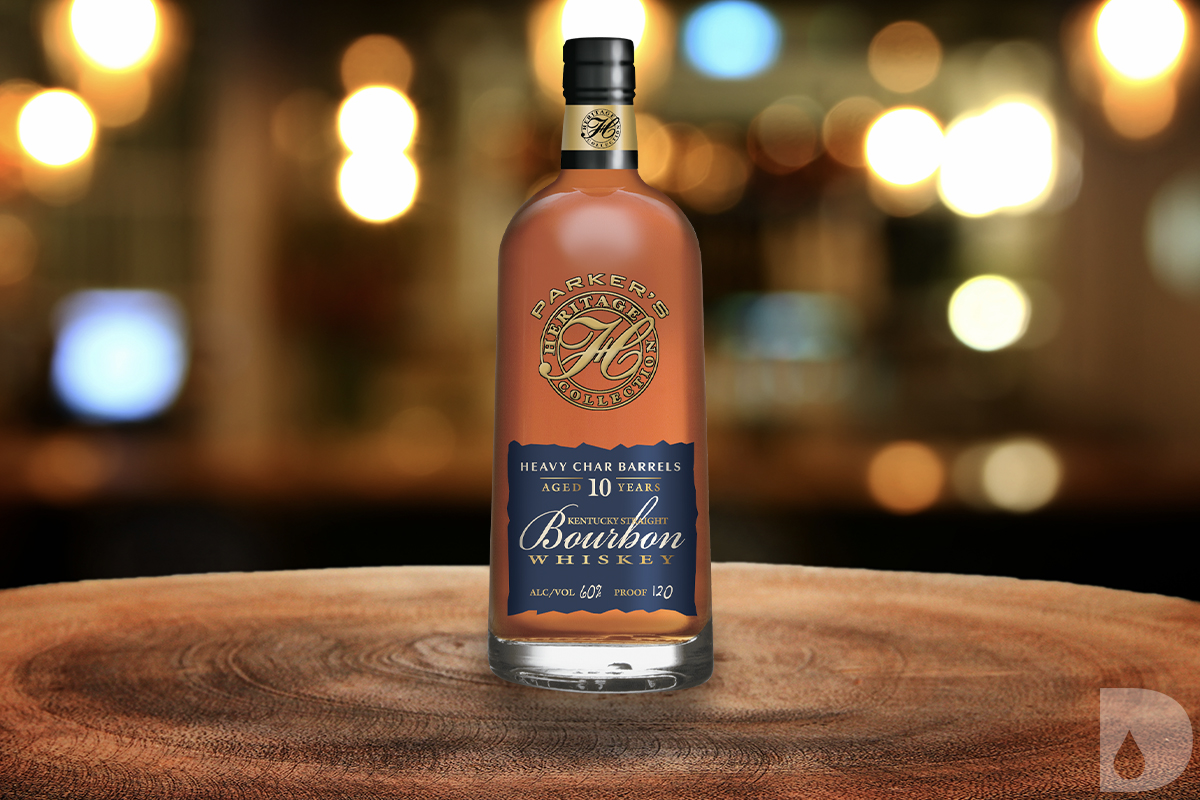 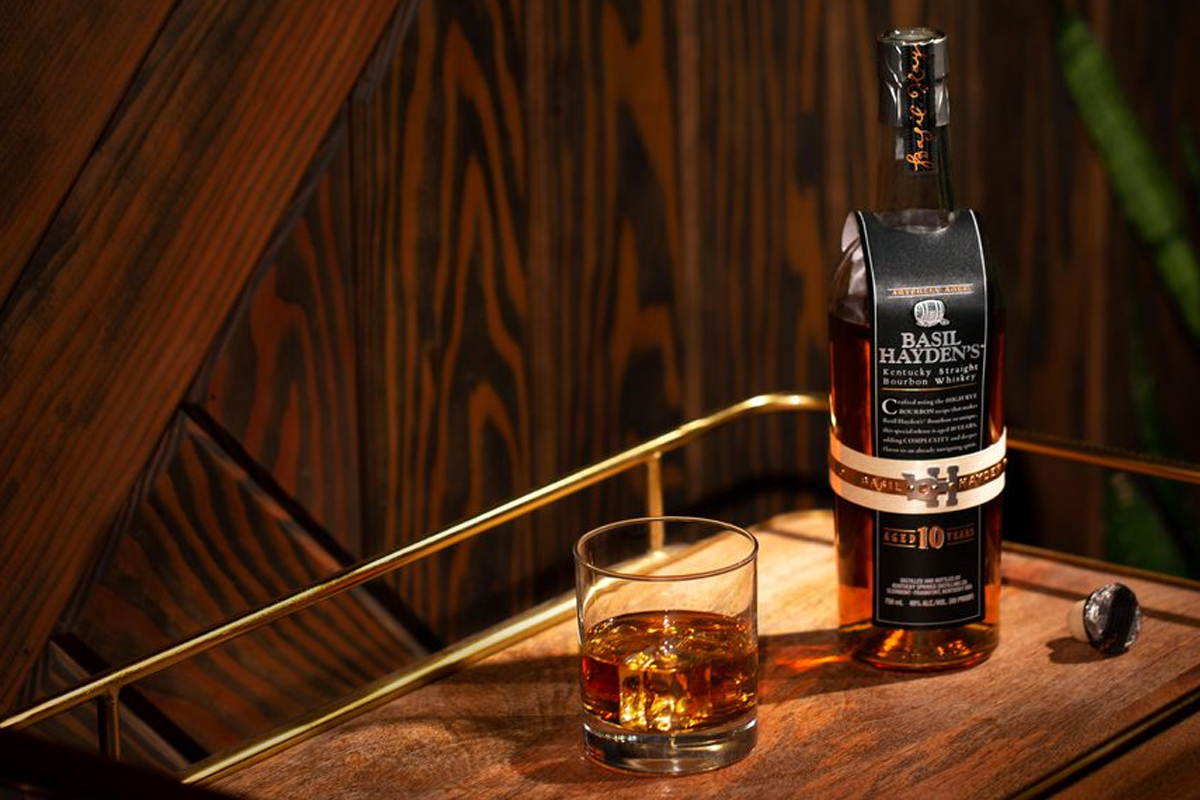 Speyside single malt distillery Benriach announced a revamp to its core portfolio with four new additions this week. These four single malts were crafted by Master Blender Rachel Barrie and form the core Benriach portfolio. The range was inspired by a 1994 release of Benriach Original Ten. Meanwhile, the packaging was influenced by the natural environment surrounding the distillery.

“The new range perfectly marries tradition and innovation that is central to Benriach’s story,” said Barrie. “In the new Original Ten, a savory, rounded malt character might be discerned, whilst The Twelve balances richly sherried malt with added layers of fruit complexity, reaching a pinnacle at 12 years old. The new Smoky Ten and Smoky Twelve explore the sweet smokiness of Benriach, enriched through innovative combinations of rum, virgin oak and Marsala cask mingled with more traditional bourbon and sherry.” 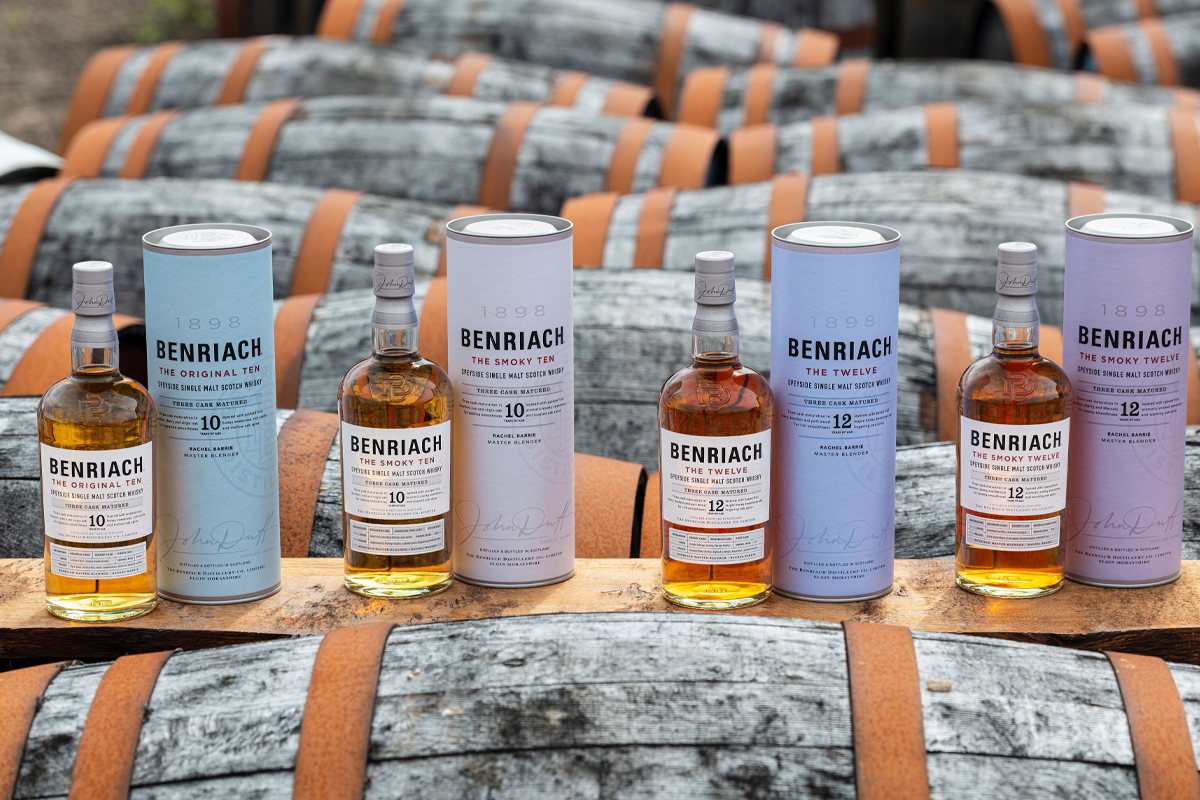 This is a non-peated single malt which is aged in bourbon, sherry and virgin oak casks. After at least 10 years of aging it is bottled with natural color at 43% ABV. It has an SRP of $53.99.

This is a non-peated single malt which is aged for at least 12 years in bourbon, sherry, and port casks. The whiskies are then married and bottled with natural color at 46% ABV. It has an SRP of $59.99.

This peated single malt is made with both unpeated and peated spirit, the latter is smoked with Highland peat. It is aged in ex-bourbon, ex-Jamaican rum and toasted virgin oak casks for at least 10 years. Then the casks are then blended and the whiskies are allowed to marry. It is bottled with natural color at 46% ABV and has an SRP of $59.99.

Also made with a blend of peated and unpeated spirit, this single malt used three casks for maturation—bourbon, sherry and Marsala wine casks. After aging for at least 12 years the casks were blended. It is bottled with natural color at 46% ABV and has an SRP of $64.99.

This core portfolio will be available in the US in October 2020. Additionally, you can expect to see 21 Year, 25 Year and 30 Year single malt bottlings joining the core Benriach portfolio in 2021.

“Launching our business with Hedonism was widely seen at the time as unusual, because so few Scotch whisky companies bottle 100% grain whiskies,” says Founder and Whiskymaker John Glaser. “I am hopeful that over the years, we have shown people how delicious good quality Scotch grain whisky can be and as a result, Hedonism has become a signature whisky for us. For these reasons, we love to create special, limited edition Hedonism bottlings to commemorate important milestones and events.”

Compass Box Hedonism Felicitas is bottled without added color or chill-filtration at 53% ABV. It’s available nationwide in limited quantities with an SRP of $175. 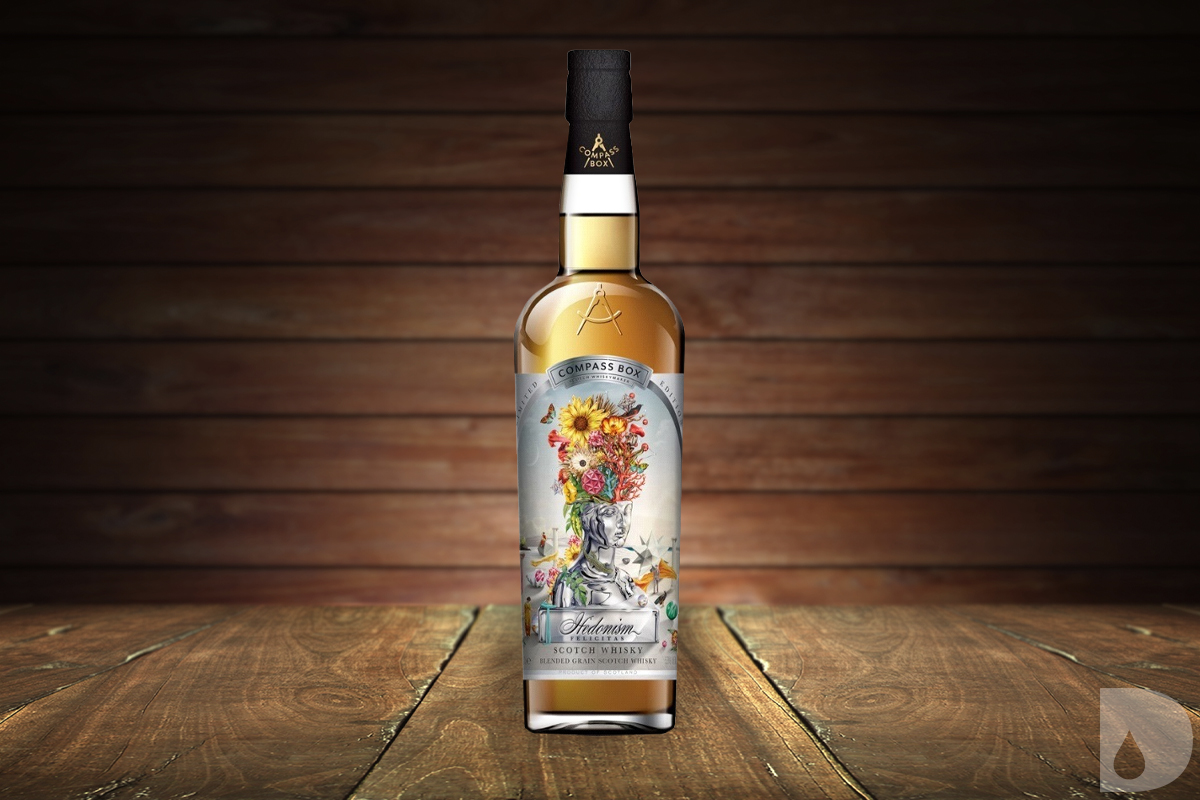 The Final Installment in The Balvenie Fifty: Marriage Trilogy Released

The Balvenie Fifty: Marriage 0614 is the third and final installment in the Marriage series. Like the two previous editions, this was crafted by Malt Master David Stewart. He blended rare single malts which were aged for 50 years or more in both American and European oak casks. The single malt, drawn from the American oak casks, uses the same casks that were utilized for Marriage 0197, but the European oak casks were new and made up 36% of the blend.

The whisky is presented in a wooden tube made of 50 layers (48 elm, 2 brass). The tube also includes an etched brass certificate and bottle glorifier. The decanters are 100% hand-blown crystal. Available globally in limited numbers as of September 2020 with an SRP of $40,499.99. 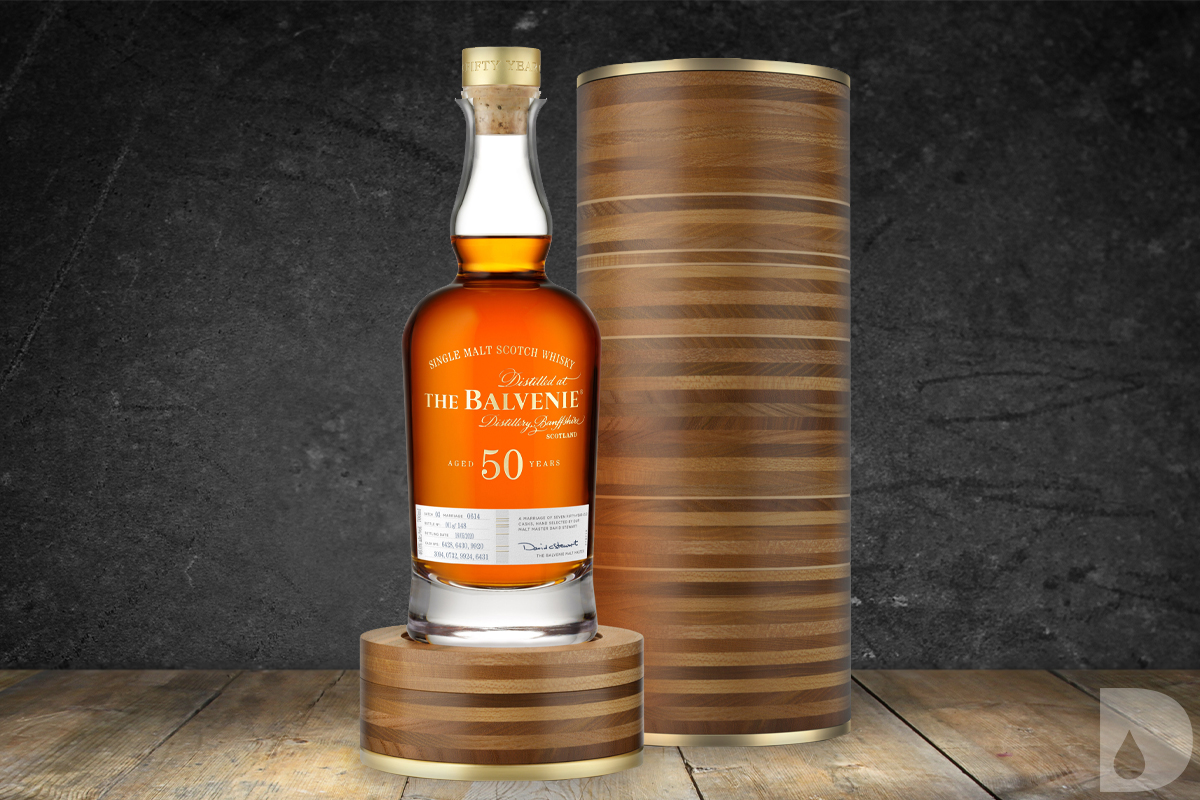 Bacardí Spiced Rum is made with an undisclosed list of spices and is aged in specially selected charred American oak barrels. This was formerly released as Bacardí Oakheart Spiced Rum in 2011, but Bacardí Spiced is a relaunch with a new name and new look. Available as of fall 2020, it has an SRP of $12.99. 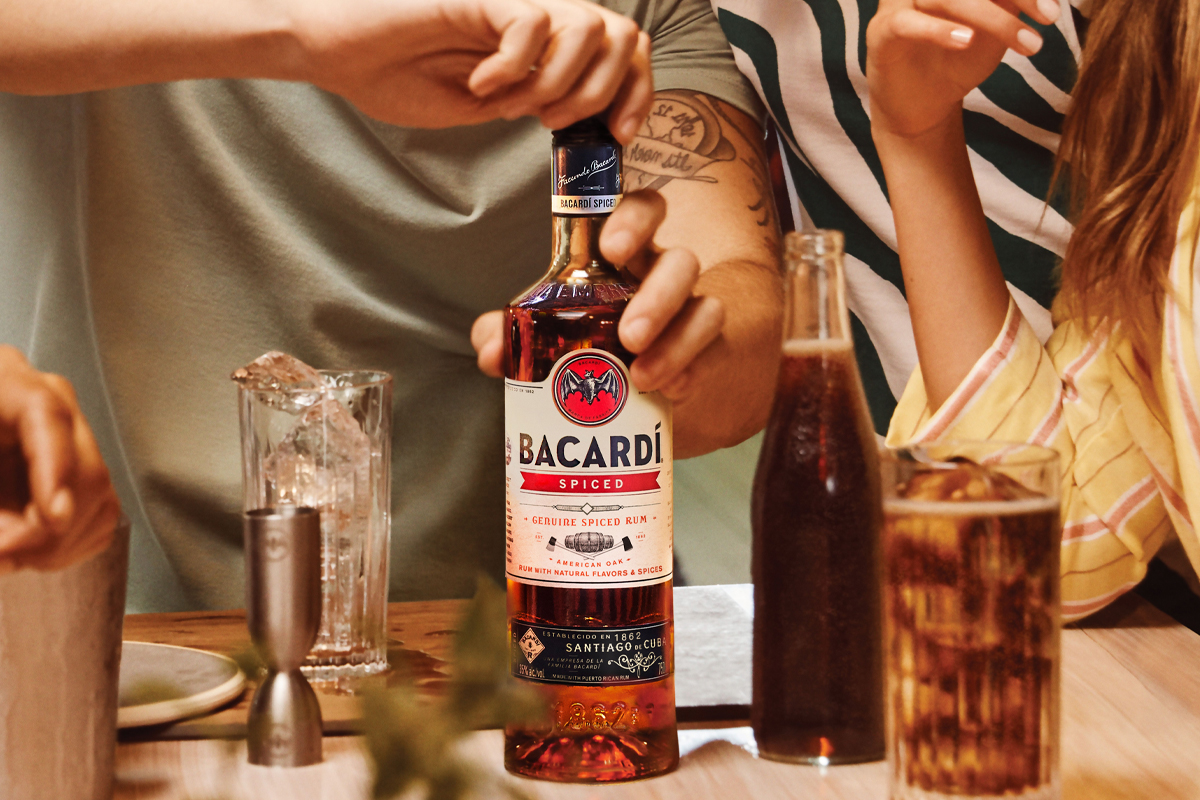