Dornoch Distillery: Recreating the Past

Just two years in, the Thompson brothers are ready to move their Dornoch Distillery to a new, more spacious location. Their hunt for recreating a lost, old-style Scotch whisky is time-consuming and inspired. In the meantime, it’s their organic Highland gin that pays the bills.

Dornoch is a tiny, picturesque coastal town in the Northern Highlands of Scotland. It’s sandwiched in between the North Sea on the East, and the A9 on the West—a road that leads all the way to Thurso, where you can catch the ferry to the Orkney Islands. If not for the weather, visitors could mistake Dornoch’s beautiful, sandy beaches for the Mediterranean. 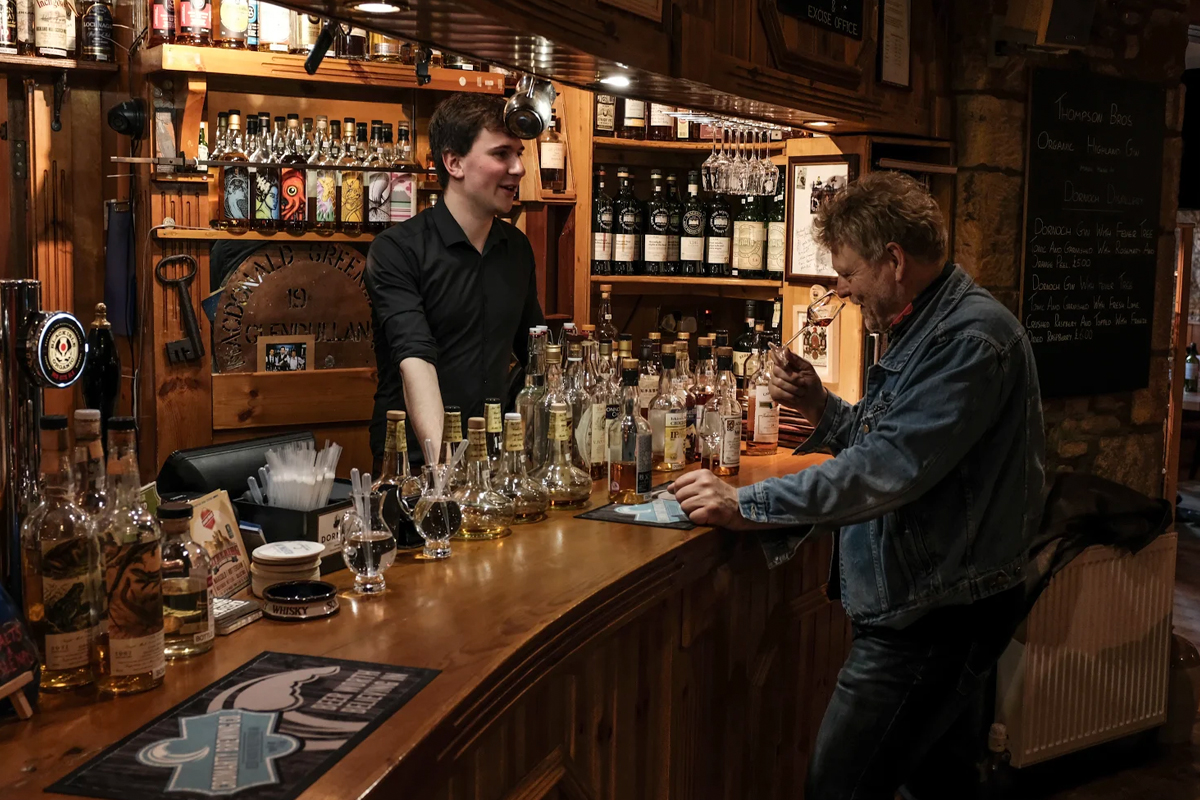 Somewhat sleepy during the winter months, Dornoch comes alive in the summer. Tourists drive up to enjoy the fresh sea air, as well as the Royal Dornoch Golf Club—one of the finest championship courses in Scotland. Located in the heart of town is the Dornoch Castle Hotel, world famous for its whisky bar. The bar is revered for its many old and rare bottlings from bygone times. It is a reflection of its two proprietors, brothers Simon and Phil Thompson.

Whisky enthusiasts visiting the area make sure to allot time for a visit to the bar, and often book a room at the hotel as well. With distilleries such as Clynelish and Balblair in the immediate vicinity of Dornoch—and Glenmorangie, Dalmore and Old Pulteney also within driving distance—making the trip to the North is worthwhile. Even more so since the Thompson brothers opened their own distillery in 2016. 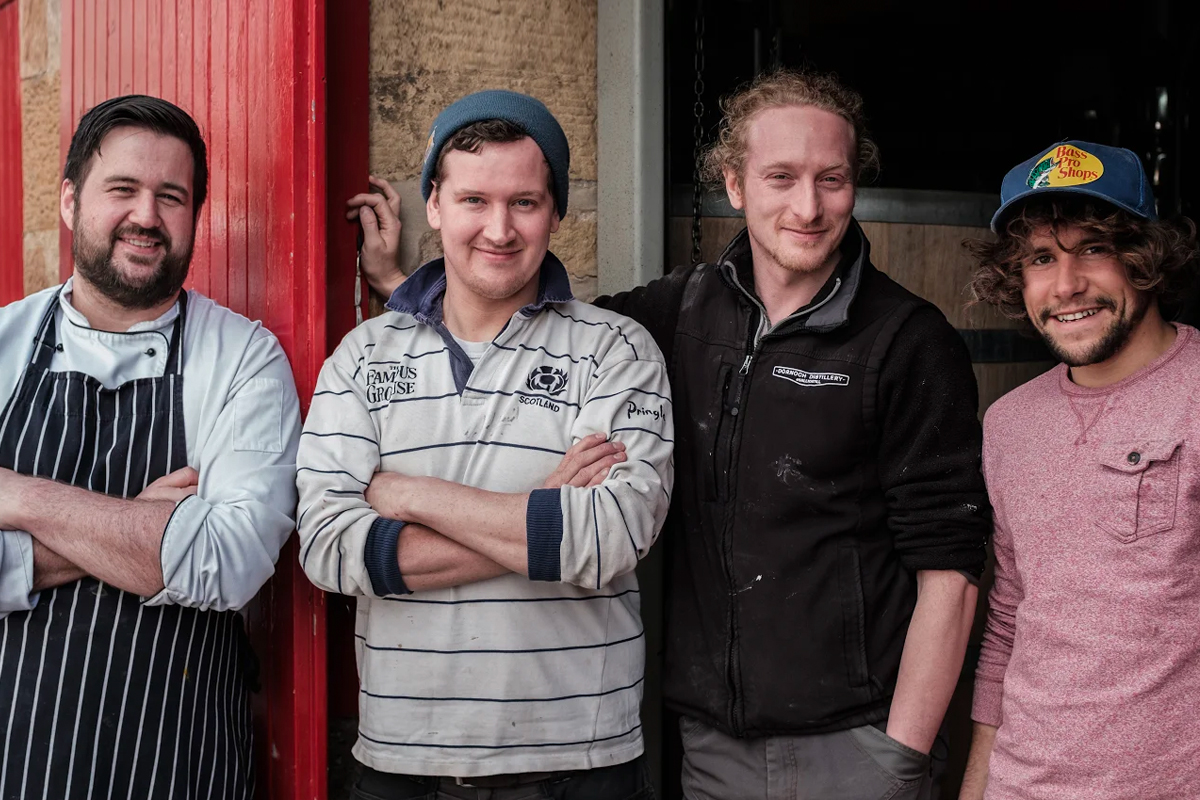 Running a whisky bar of such renown has afforded the brothers the opportunity to sample many old-style whiskies. Glen Grant from the 1930s. Bowmore, Macallan, Laphroaig and Springbank from the 1960s. Brora and Tomatin from the 1970s. “It was a wonderful point in the industry”, says Phil. “ The accumulated knowledge of hands-on workers was combined with more science and understanding of the techniques involved. The inconsistency resulted in some terrible lows, but the highs were mind-blowing.”

Experiencing such legendary whiskies only drove their desire to start their own distillery. They were convinced it was not impossible to bring back some of the flavors they desperately miss in modern whisky. After a round of crowdfunding—which included the sale of the first 100 octave casks—combined with their own funds, the brothers’ dream came true, and Dornoch Distillery was born.

SLOW AND LOW – THAT IS THE TEMPO

The brothers’ goal is to try and form their own style by way of older techniques, ingredients and a more relaxed, less yield-focused production. They also use 100 percent floor malted Plumage Archer barley. Their spirit distillation is long and slow with cut points being made by nose and taste. Most importantly, they use brewers yeast strains. Fermentation at Dornoch Distillery takes at least seven days, and sometimes up to ten days. An eternity compared to most other distilleries in Scotland, where a four-day fermentation is considered extremely long. 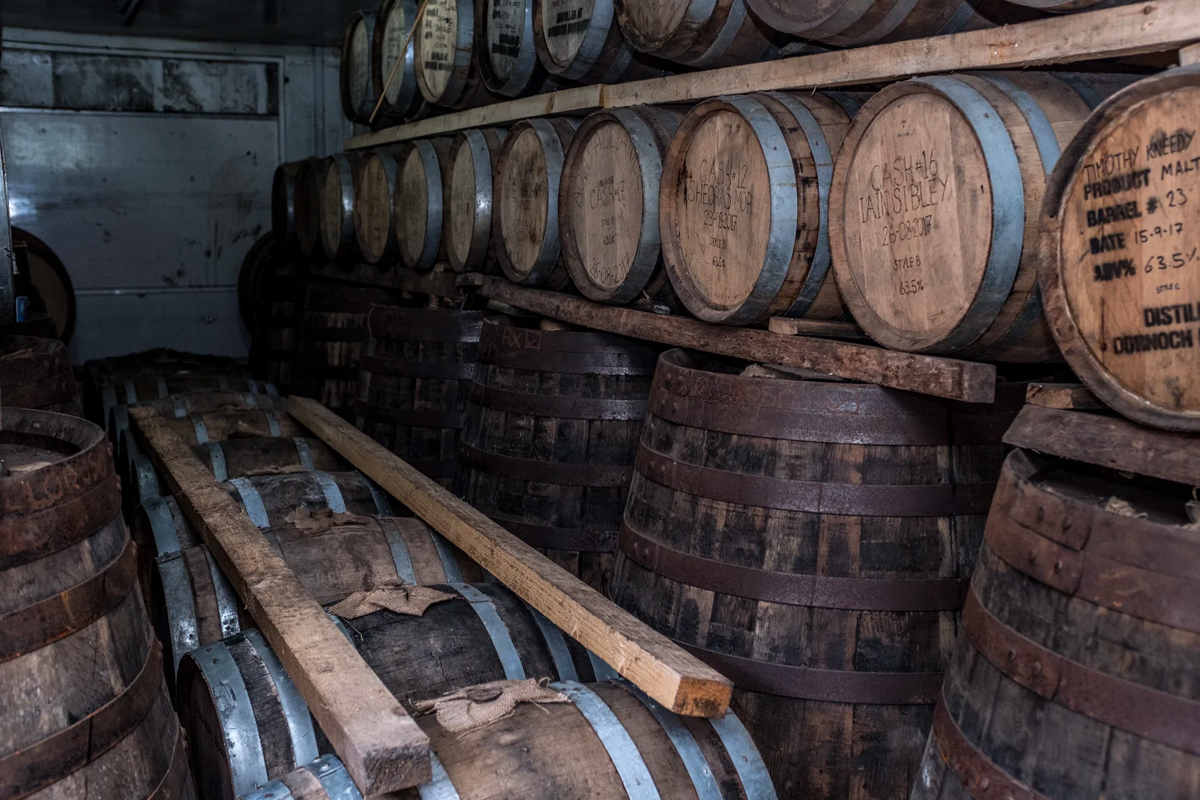 “We do all of the propagation work in house”, says Phil. “The result is a large catalog of new make made with different yeast varieties—there are massive differences between them all. We start with such wonderful barley, rich with natural oils and protein. Using, by industry standards, relatively passive yeast allows us to retain a lot of those flavors from the oils and protein in the barley. During the fermentation we allow the yeast to develop new flavors as well as malolactic fermentation to take place.”

It will take a little longer before the first Dornoch whisky reaches the magic age of three years. However, Dornoch spirit is already available in the form of the Thompson Bros Organic Highland Gin. It is distilled from a blend of 90 percent organic grain spirit and 10 percent of their own floor-malted malt spirit. The grain spirit is combined with a proprietary botanical blend, consisting of meadowsweet, elderflower and black peppercorn, among others. 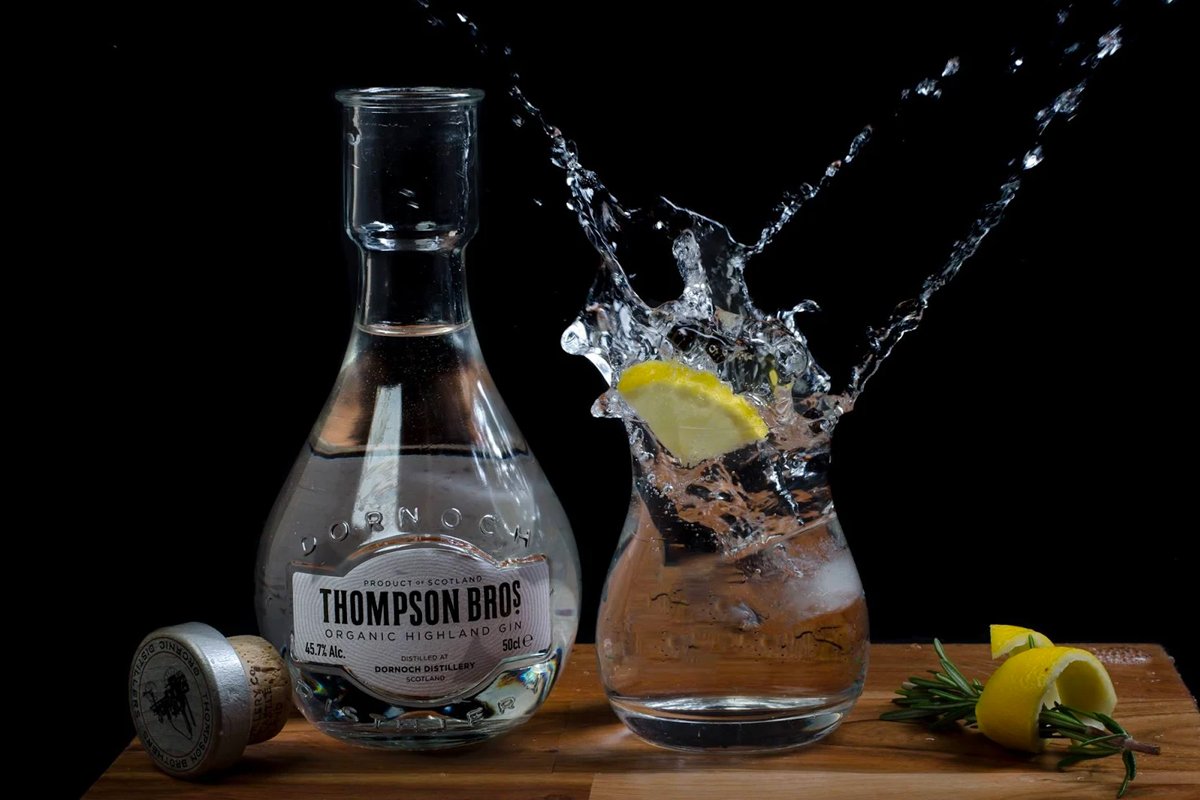 “We are now available in over ten international markets and have made it into some extremely good acclaimed establishments”, says Phil. “I think using ten percent straight new make spirit sets us apart. It gives the gin a whole new dynamic, lots of natural fermentation based fruity flavors and a wonderful texture and mouthfeel. Indeed, the gin has gone very well.”

It has gone so well in fact that Dornoch Distillery will move to a new site in 2019. The cramped, 135-year-old former fire station has served the brothers well so far. But to be able to keep up with the demand for their gin, and to ramp up whisky production, a more spacious location is needed. This time in the form of an old slaters yard located just 200 yards from their current distillery. “The focus of the new site will be to retain the production style and methods but to improve the workflow from goods to bottling and cask filling,” says Phil. “We also hope to be able to receive tours.”

A second round of crowdfunding has launched to finance their move. So far the brothers have managed to remain independent, and have thrived without financing from banks or private investors. It’s a must for them, because they want to have final say in everything. “I think there is something beautiful about doing it all in-house”, says Phil. “I suppose it’s the feeling someone gets building a beautiful house themselves versus paying a contractor to do everything. We have full control of all processes and learned so much during set up. Now let’s hope the house doesn’t fall down.”