You may have been introduced to our Distiller platform from your interest in whiskey, only to find that we also write about gin. If you’re unfamiliar and would like to get to know this category, we’ve got the basics covered. Our very own Spirit Director & Editor, Stephanie Moreno, presents to you, a gin introduction:

In short, gin is juniper-flavored vodka. Juniper is required for every style of gin (and it is also required for genever). You start with a neutral spirit, which you get by distilling an agricultural product. Typically grain is used, but potato, grapes, and sugar are fine to use. Juniper and other botanicals are added to the still at some point in the distillation process. Sometimes the botanicals are added to the pot-still and steeped (much like making tea). Sometimes the botanicals are infused via vapor-infusion; they are placed in a basket within the still and the spirit passes through them, capturing some of their essence. Water and sometimes more neutral spirit is added to bring the gin down to the desired bottling proof.

If you think you don’t like gin, but love whiskey, try genever. It may surprise you.

Genever, derived from “juniper,” begins with a malt-wine which is not a wine at all. In broad strokes, it begins much like many whiskeys are made. A mashbill (generally comprised of rye, corn, and/or wheat with a bit of malted barley) is fermented. It is then distilled in a pot-still. This malt-wine is heavier and more robust than a distillate that is distilled in a column-still. This robust base is blended with a juniper distillate, often with other botanicals added).

What are gin’s origins?

The credit for the invention of genever, the predecessor of gin, is given to the Dutch in the Low Countries of Belgium and the Netherlands, in the late 1500’s. To make the spirit palatable, juniper and sugar were added to improve the taste. The Dutch East India Company ensured that there was a steady flow of spices from around the world to be added in addition to juniper. And as spices came in, genever flowed out around the world. The British had begun to develop a taste for genever over the course of the Anglo-Dutch wars which first began in 1652. 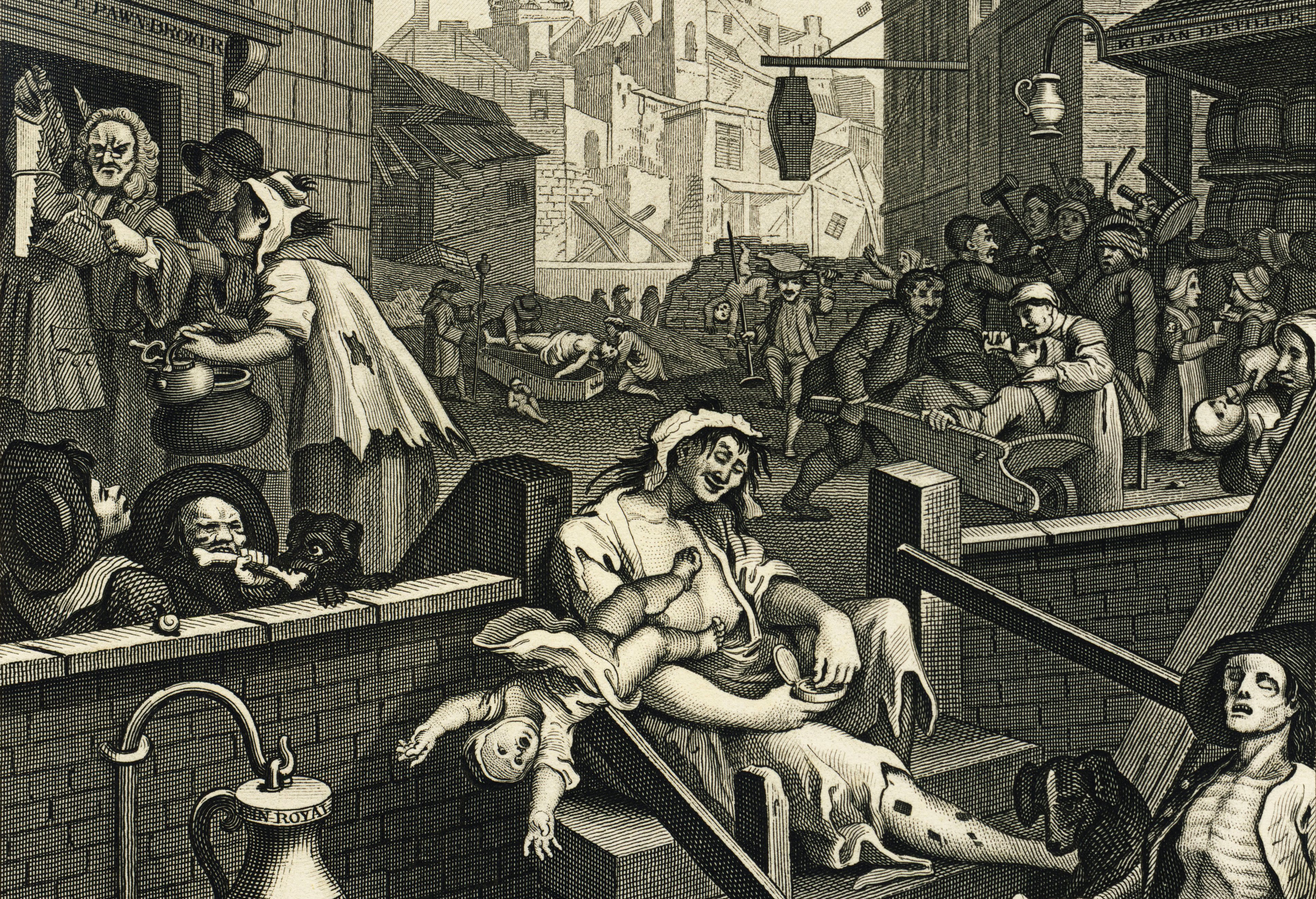 Genever’s rise in popularity grew even further in Britain thanks to their new Dutch king, William III. He, along with his wife Mary, were crowned joint monarchs in 1689. King William subsidized distillation from grain in order to quell the importation and consumption of French brandy. This sparked the Gin Craze in England and in particular, London in the 1700’s. This craze is often compared to the crack epidemic in the 1980’s.

This craze eventually subsided after several decades and people of all classes were enjoying genever, known simply as “gen”. The quality began to improve and with the invention of the column-still, folks were able to turn out a decidedly different product. What started as genever, eventually became the dry gin as we know it today.

What about the Americans?

Even as early as the colonial period, we Americans were drinking what we called “Hollands” or genever as it was being imported here. This continued through most of the 1800’s until the end of the 19th century when London Dry gin began to make its appearance. Even through Prohibition (when we had to resort to bathtub gin) and through both World Wars, gin was enjoyed throughout the country. That is, until vodka started to take over in the 1950’s. By the 1970’s and 80’s, gin was out of vogue completely and we entered the Dark Ages of the Cocktail. (Please find Tom Cruise in “Cocktail” as he recites “The Last Barman Poet” for a rundown of the drinks.)

Where are we today?

Of course, today, everything old is new again. Gin has made its comeback, beginning in part with Bombay Sapphire’s gorgeous blue bottle which was introduced in 1987. Hendrick’s made a splash in 2001 when it came on the scene steering away from classic gin botanicals with its rose and cucumber use. The cocktail renaissance that we are currently in has caused there to be quite an interest in gin because, as it turns out, gin is used in quite a lot of classic cocktails. And genever is making quite the comeback itself (it was still being made and consumed in its home countries, but had limited availability elsewhere). Bols reintroduced their Original Bols Genever in 2008 and more brands are slowly expanding their reach. There are even genever-style spirits being made by some distillers in the U.S.

We Americans are following Hendrick’s lead and creating some gins which, while they still employ juniper, there is less of an emphasis on that botanical. Aviation Gin released in 2006 was most notable in its botanical makeup of elletaria cardamom, lavender, and sarsaparilla. We are bringing in some other botanicals not commonly used in gin production–botanicals such as pine needles, elderflower, cardamom, chamomile, apples–the sky’s the limit. You’ll see the term “New Western” or “American” or “Contemporary” to describe these gins. We’ve simply called them “Modern” as the rest of the world and (even jolly old England) are creating these types of gins. They are often technically made as a London Dry or a Distilled Gin.

Craft distilling has been on the rise and our demand for more whiskey has in turn created something else: barrel-aged gin. Craft distillers often distill vodkas and gins to sell now while waiting for their whiskey to age. When they come of age, gin goes in the barrel for a brief respite creating a new dimension for the gin. And you can be assured that bartenders are taking advantage creating new cocktails with them.

Thirsty after our gin introduction?

Irish Gin: Innovation on the Isle