Louis XIII Cognac from the house of Rémy Martin has long been upheld as one of the true premier pours. It’s no exaggeration to say that every sip is a work of art a century in the making. Included in the blend is eaux-de-vie aged up to 100 years in each final, masterful bottling. Looking beyond its prestige, and looking within its instantly recognizable decanter, offers an explanation for what makes it so special.

Louis XIII Cognac is a Legacy

When Baptiste Loiseau became the Rémy Martin cellar master in 2014, he reflected on the history of Louis XIII, first released in 1874, and his task of maintaining the quality of a singular product established 140 years prior. “It’s the privilege to handle this mission and maintain this consistency,” Loiseau says. “This is the best proof of what human beings can make with time.” 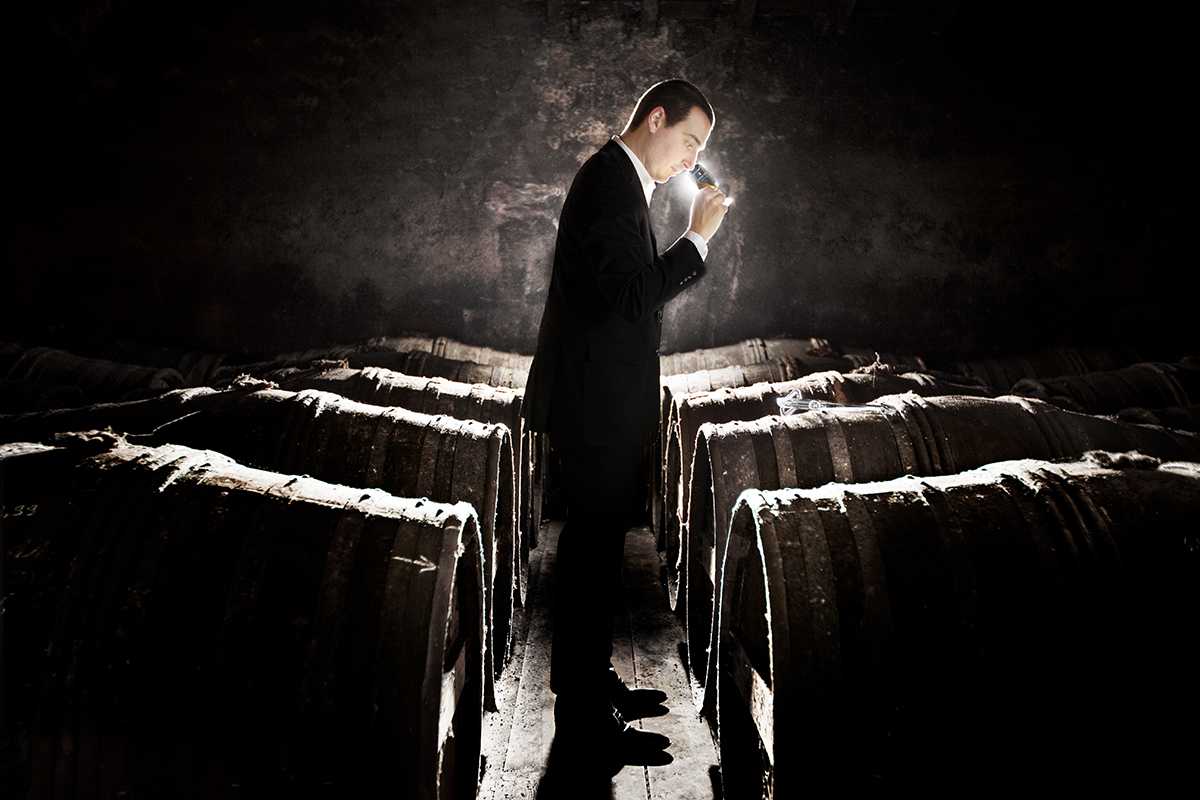 Consider that even as the current cellar master, Loiseau coordinates with a lineage extending both behind and ahead of him as he works on every batch. It’s an effort shared across generations, with the talent and time of multiple cellar masters going into every release. “This will be transmitted to the next generation in the decades to come,” Loiseau says. “It’s only the beginning of something, but it’s also the end of something.”

What he means is that the eaux-de-vie he selects as potential candidates for extensive aging and use in Louis XIII won’t be blended by his own hands. Indeed the old stocks he works with today were selected under the watchful eyes of multiple predecessors. “You have in mind that we are preparing the future for the next generation,” Loiseau says of tabbing his premium eaux-de-vie.

Along the same lines, he must keep his cellars well-stocked for the future even as he cherry picks what he wants to use now. “If you take all the batch, you won’t have this eau-de-vie for the next year, so in fact you also have to preserve that heritage,” Loiseau says. “You have to preserve and manage this stock, not destroy it. I won’t be impacted, but the next generation will be.”

Louis XIII Cognac generally incorporates eaux-de-vie ranging from 40 to 100 years of age. In fact, it is said to include over 1,200 individual components. More important than those figures is what they represent. “The most precious and the oldest eaux-de-vie that we have from Grande Champagne,” Loiseau says. 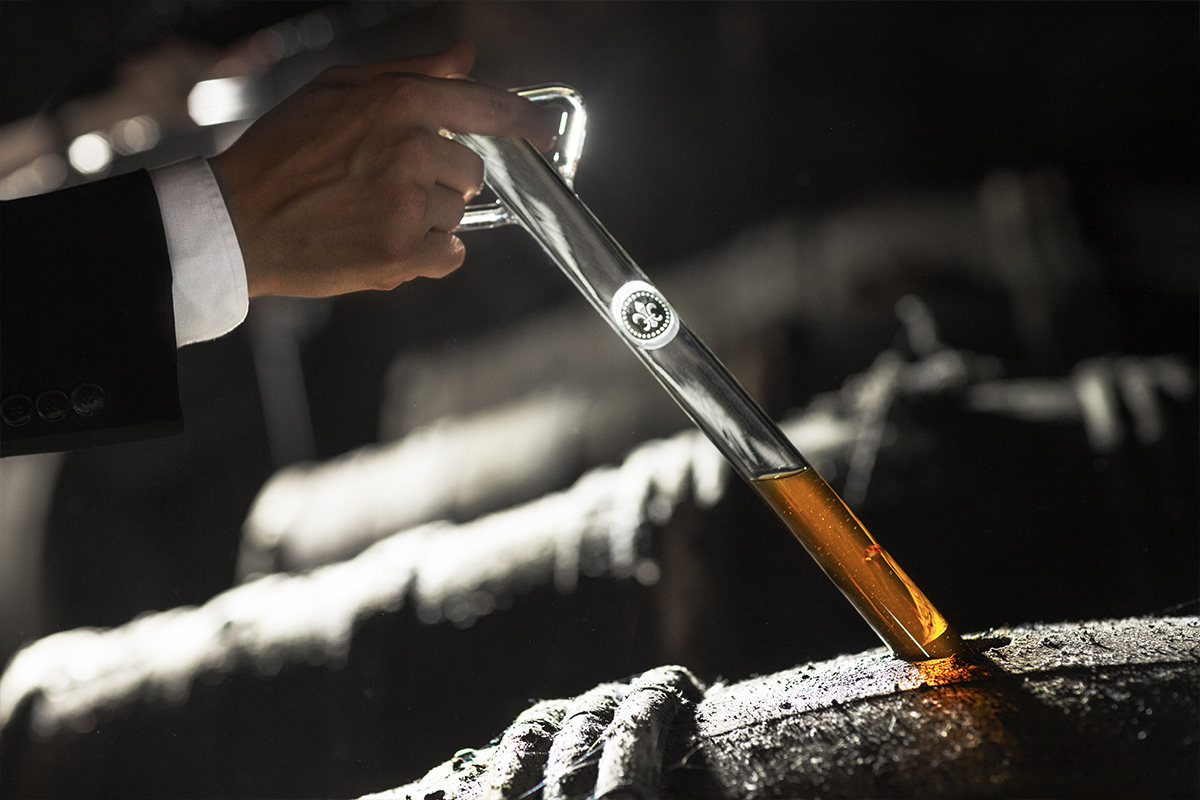 Notably, Rémy Martin uses grapes from both the Grande Champagne and Petite Champagne regions for its other marques. Conversely, from the inception of Louis XIII, this blend has been 100 percent Grande Champagne. “It’s the terroir where you have the best potential for aging,” Loiseau explains. “It’s difficult to express all of the aromas, which is why you must wait all this time. It is only after 35, 40 years of aging in Grande Champagne that you have the beginning of something that’s really flowery, with roses, jasmine, honeysuckle, lilac. You need time.”

Grande Champagne is known for its chalky, limestone-rich soils, and it’s “because of this that Grande Champagne, which is at the center of the region, is the 1st cru of the region,” Loiseau says. With Louis XIII Cognac, he’s able to offer a direct look at what that specific region provides. “It’s a deep inspection of terroir, which is really meaningful for us.”

The Selection of the Blend

The eaux-de-vie Loiseau and his tasting committee are selecting today is perhaps a half century or longer away from being incorporated into a blend. Therefore, he’s not thinking about the eventual age of that spirit, but rather its potential. “Before speaking about the age, you have to focus on the potential for aging,” he says. “We make selections based on the quality of the un-aged eau-de-vie, selecting maybe between 1 and 3 percent that will have the potential to be aged longer that I put aside in the cellars, knowing that I will not be the one to use this eau-de-vie in the future.” 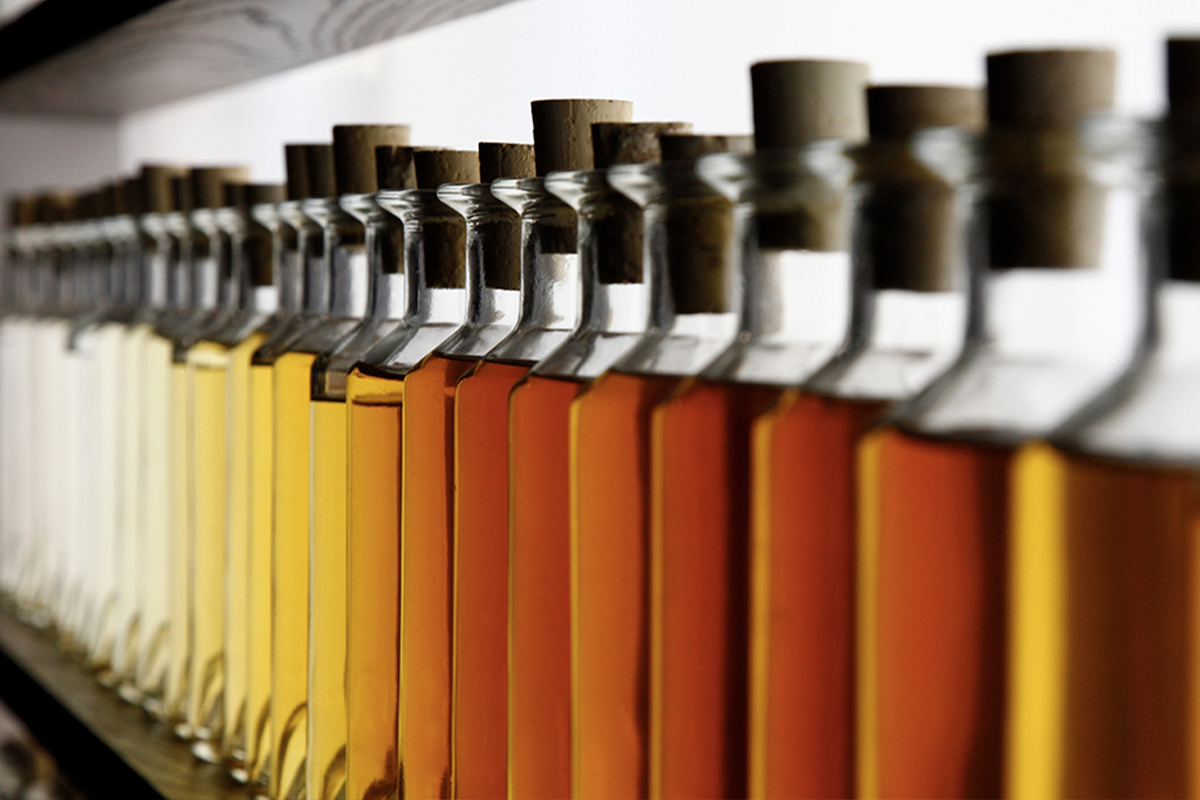 What he searches for is an eau-de-vie which hits across a range of sometimes contrasting qualities. It must indicate both where it’s from and how it’s made. “You want something rich but also light and elegant, coming from Grande Champagne; fruity, not something too heavy. It’s balance,” he says. “All of the volatile components are coming from the wine, it’s not something that will be created in distillation. But these eaux-de-vie are powerful, we say they are full of richness, density, because of the distillation on the lees, which gives lots of smoothness, richness, buttery notes combined with the fruity notes and elegance.”

If there’s uncertainty about whether or not an eau-de-vie should be selected, then you actually have certainty it shouldn’t. “If you are not 100 percent sure that this eau-de-vie has the potential, it’s then the fact that it doesn’t have the potential,” Loiseau says. “It can’t be selected for Louis XIII. We are demanding, but it’s for the beauty of something that will be special. You need to see that combination right from the very beginning, and there’s a very small amount of eaux-de-vie that can reach this quality.” 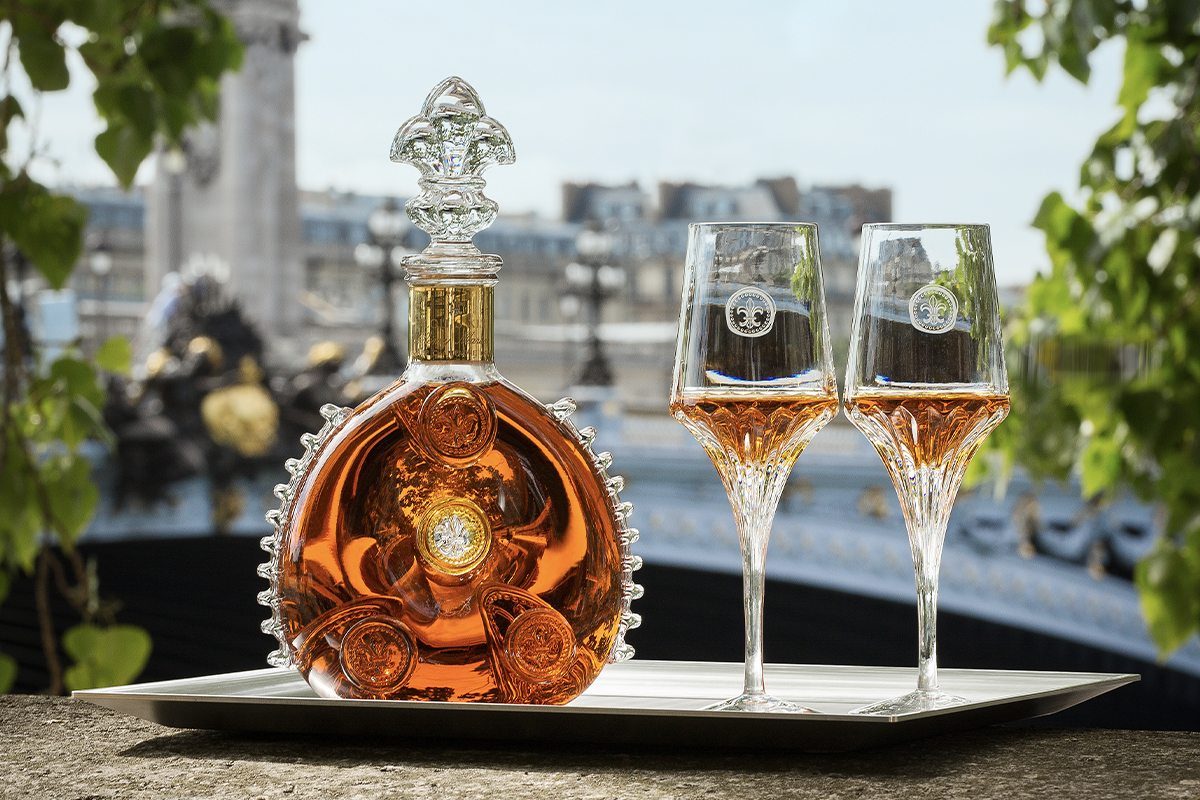 The same balancing act continues when it’s time to blend the aged components in the actual creation of Louis XIII Cognac. “Once I am working on the final blend, I have to walk this line and avoid something that’s too dense or too light, too spicy or too strong, and it’s because of this selection of the eaux-de-vie from the very beginning, and then letting time do its work after a very long time in the cellar, that we have this combination,” Loiseau says.

As for trying to pin down an average age for the blend, Loiseau reminds us that there is no precise formula. Instead, he says, it’s an ongoing year-to-year process. “You have to adjust the final blend every year, because the eaux-de-vie have been evolving over time. That’s why it’s not a ‘recipe’ that you apply,” he says. “It’s really something that’s determined by tasting.”

Indeed, tasting is what it’s all about. So when it comes to Louis XIII Cognac, Loiseau wants to create a full experience. This includes how the cognac is presented and poured to appreciating initial aromas and allowing the spirit to evolve from sip to sip. “Once you open Louis XIII, it takes up all the space in a room with its aromas,” he says. “It’s not something you appreciate in five minutes.” 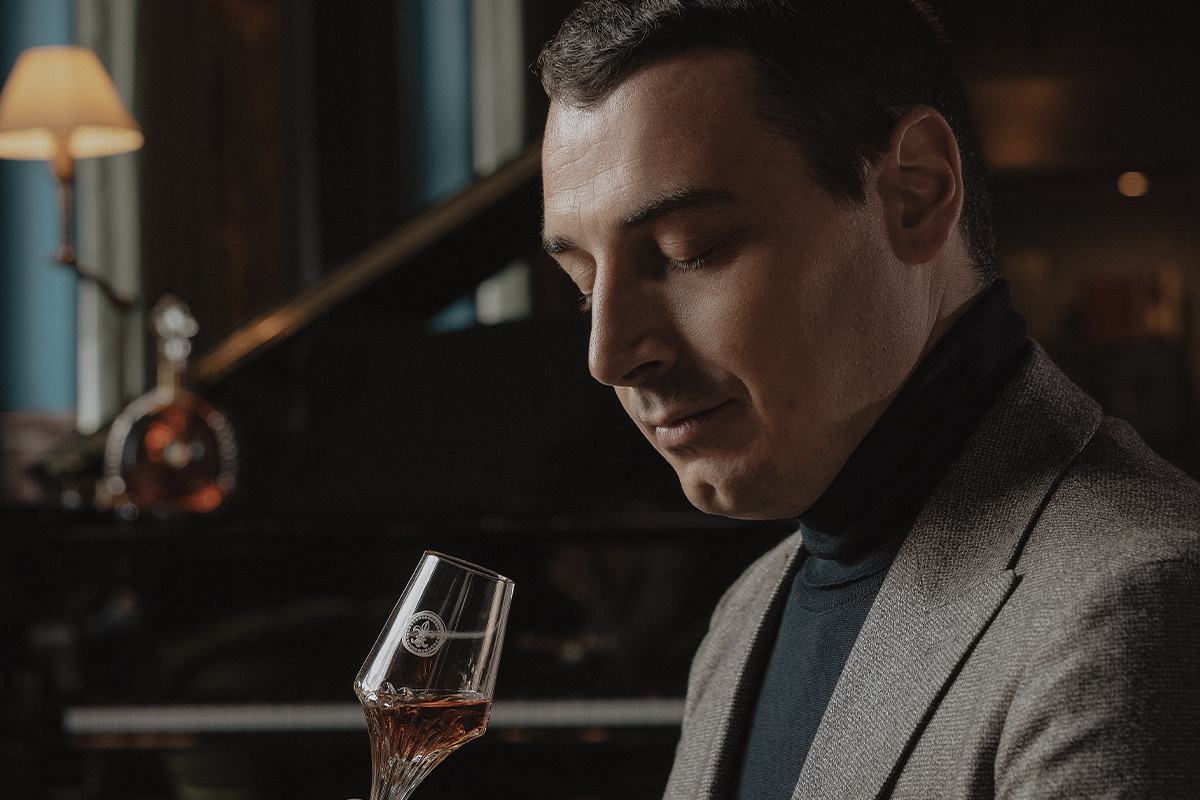 He suggests nosing your glass first from a distance before moving in closer. “The aromatics all come one after another, the most volatile will come first, then the notes that are denser and heavier will be at the bottom of the glass,” Loiseau says. “These layers, I often describe them as waves which come one after another. One wave has a presentation which might be heavier, then another might take you to a different place, it’s something that is rolling, rolling.”

Take a tiny first sip simply to coat the lips and mouth and prepare for what comes next. “Most of the time people want to go a little bit in a hurry in tasting, and it can be disappointing,” Loiseau says. “If you go too rapidly, it will be the alcohol which will express first.”

Now, finally, take a full sip and let it linger. Think not only about tasting notes, but the spirit’s evocative effect. “It’s really something I learned in the tasting room, it’s crucial to express what you feel while tasting,” Loiseau says.

Pay Attention to the Details

Keep in mind that your specific tasting experience may change each time you enjoy a glass of Louis XIII Cognac. “Even though the blend has to be consistent in the making, in the end the experience will be different, so it’s always exciting,” he says. The food you ate prior, the temperature of the room and time of the day, all of these minute factors impact the aromas and flavors you pick up. That’s why cognac’s tasting panels are notoriously stringent and consistent with their protocols. They must remove as many variables from the process as is humanly possible.

After draining your last luscious sip, cherish the final rolling waves of flavor across a lengthy finish. Even then, Loiseau notes you’re not done yet. Even the empty glass will offer you a tantalizing aroma for hours to come. “What’s incredible is that when the glass is empty, you still have the soul of Louis XIII inside,” Loiseau says.

While getting your bearings with the tasting process is useful, ultimately it’s all in service of one simple thing, rules be damned. “At the end, it’s a matter of pleasure,” Loiseau says. Go ahead and take your time savoring the moment.

Get acquainted with this French apple brandy