Vodka translates to “little water” in Russian (водка) and Polish (wódka). These countries both lay claim to be the first to distill vodka, but exactly when and where vodka was first produced is a little murky. Suffice it to say, vodka has been around for at least 500 years. But it is a relatively new phenomenon here in the States.

Vodka consumption in the US was small, tiny even, in the mid-20th century; and the Cold War wasn’t helping matters. We have to credit Smirnoff for kicking off the US vodka revolution in the back in the 1950s. A New York ad man named Milton Goodman created the company’s most famous tag line, “It leaves you breathless.” Smirnoff’s ads ran for six years and helped to skyrocket US vodka consumption. Today, vodka is the reigning champ in spirits consumption both in the United States and around the world.

WHAT EXACTLY IS VODKA?

A better definition would be that vodka is a spirit made from any agricultural product—most commonly grains or potatoes. It typically is distilled to 95% ABV (190 proof). Water is added to dilute the spirit down to bottling proof. Vodka is typically filtered prior to bottling, often with charcoal, and it is usually clear and unaged.

WHERE IS IT MADE?

Vodka can be made anywhere. The most notable countries include Russia, the Baltic states of Estonia, Latvia and Lithuania, as well as Eastern European countries such as Poland and the Ukraine. Generally speaking, these countries usually make old world or traditional vodkas, which are more robust and flavorful. The base ingredient is more noticeable here.

Scandinavian countries like Finland (Finlandia) and Sweden (Absolut) produce more neutral, modern style vodkas. Larger brands, such as Smirnoff and Skyy in the United States, also fall under this umbrella. While American craft distilling has taken off with whiskey production, many brands have tried their hands at vodka. Producing an unaged spirit is a great way for these producers to make some money while they wait for their whiskey to age. All this is to say that you shouldn’t assume that all American vodkas are in the modern family.

HOW DO YOU MAKE IT?

Like all spirits, you need to distill the base ingredient. When you are making something like whiskey, you want to retain these flavors. Whiskey is often distilled to a lower proof (bourbon can only be distilled to 80% ABV, for example.) With vodka, you distill to a high proof to reduce unwanted flavors with the goal being 95% ABV. Vodka will use multiple column stills or continuous stills to get the job done.

Many producers purchase an already distilled spirit, usually a grain neutral spirit (GNS). Some will add their own distilled product and others still will redistill, or rectify this GNS.

One other crucial ingredient is water, since it is 60% of your volume. This makes the source of your water, if you are a vodka maker, very important. Other spirits require this as well, but neutrality isn’t what those spirits are after.

Most commonly seen are vodkas made from grains such as rye, wheat, or barley. Potatoes are also traditional ingredients for vodka. Corn (maize) is making a mark on the vodka scene lately, particularly in the US. Molasses and sugar beets are often used in inferior, bulk vodkas. 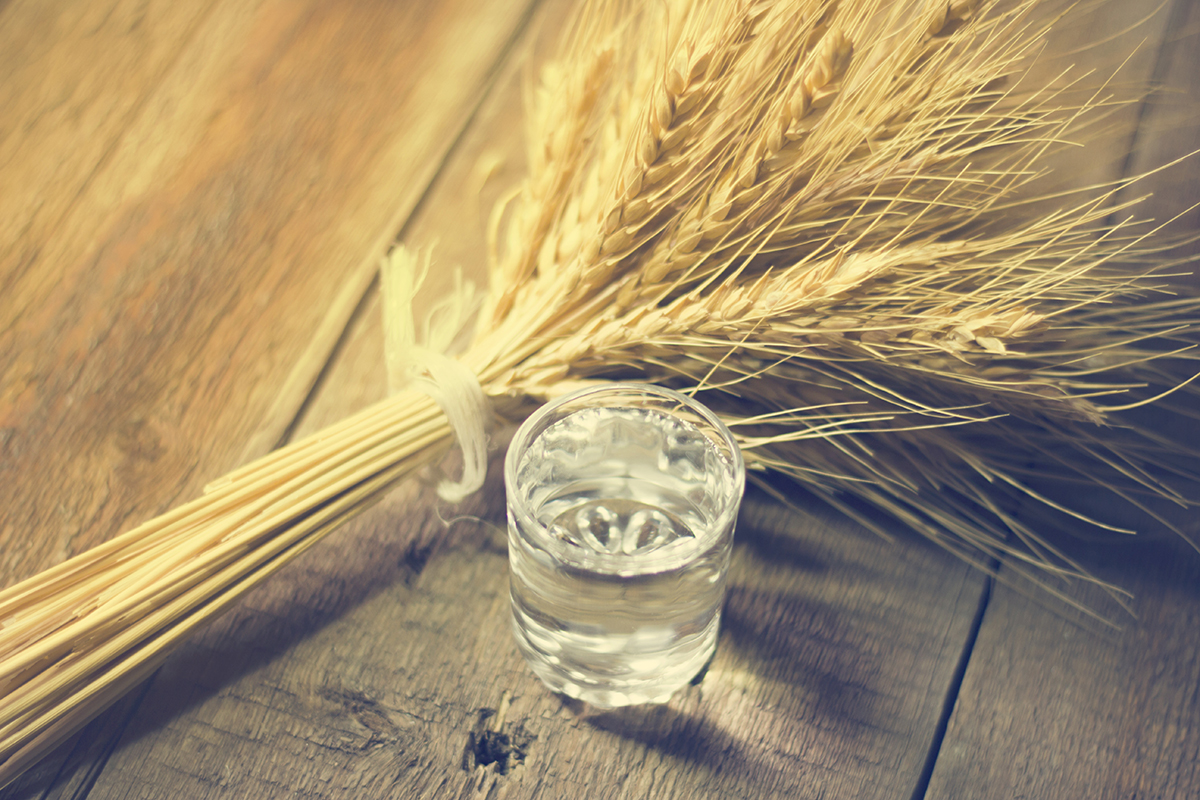 But, as we mentioned previously, vodka can be made from any agricultural product. Apples are used to make New York based Indigenous Fresh Pressed Apple Vodka. Black Cow in West Dorset, England uses whey from grass-fed cow’s milk for their vodka. And Suntory’s AO Vodka uses 100% Japanese rice to produce their spirit.

Rye vodkas are generally robust and have dark, spicy profiles.

Wheat vodkas tend to be slightly sweet with a wheat cracker flavor and citrus note.

Tasting a spirit neat or straight, particularly vodka, at room temperature is the best way to evaluate its aroma and taste. This is not commonly done here in the states but it is quite common in Russia, the Baltic states and Scandinavian countries. It is also served with food this way.

Some like like it cold! Keeping a bottle of vodka in the freezer is one way to chill down on a hot day. The texture of the vodka is richer than it would be neat. Try sipping it slowly to see how it changes.

As we’ve mentioned in our serving suggestions for whiskey, the water you use in your ice is extremely important here. Don’t use the kind your freezer makes. Use large, block ice, preferably from spring or distilled water.

The list here is endless. But iconic vodka cocktails like the Martini, Moscow Mule, Cosmopolitan, Bloody Mary and White Russian are great places to start.

You may think that flavored vodkas are a recent, 20th century idea. But infusing different herbs, fruits and spices into vodka has been done as long as vodka has been distilled.

Large brands commonly use natural flavors for their flavored vodkas. These concentrates are simply flavoring agents added to the vodka. But if they aren’t synthetically made, the term “natural flavors” is allowed. At times, sugar is added. This is also a “natural flavor”. Most brands aren’t upfront with their marketing materials about sugar in their vodka, so that’s always something to be aware of. That said, there are some brands that use real ingredients in their flavored vodkas like Belvedere, St. George, and Hangar 1. Keep an eye out for brands such as these for a real treat.

Fruit flavors are the most dominant flavoring category, but pick a flavor and there is bound to be a vodka to pair with it. Marshmallow? Jalapeño? Green Tea. Yes, yes, and yes.

Like flavored vodka, barrel-aged vodka, often called Starka, has quite a history. In this case, the tradition goes back to 15th century Eastern Europe, where it was generally created to celebrate important events like the birth of a child. To start the process, they would place their locally-made rye vodka vodka in an oak barrel—typically a used wine barrel. Sometimes they would flavor it with fruit, apple leaves and the like. The barrel would be sealed with beeswax and buried. Upon the child’s wedding, the barrel would be dug up and consumed.

There are a few Polish brands that make this commercially, but they aren’t available in the United States. Recently Absolut decided to join in on the fun with their Oak by Absolut release. Some American distillers have also taken up the cause, particularly in Oregon. We hope to see more from this small, but growing category.

Spice Up Your Cocktails With Rye Vodka

If you’re a fan of rye whiskey, have we got the vodka for you