This week the theme seems to be release trilogies. This includes the Westland Outpost Range, a new addition to the brand’s portfolio which puts a focus on the raw ingredients in the production process. Additionally, Irish whiskey brand The Whistler announced a new Cask Finish series. The casks for this trio feature sherry, calvados, and stout seasoned barrels.

But the new releases don’t just include whiskeys. The House of Angostura has a new bitters hitting shelves this month as well. You can find all the details on these releases and more in Distiller’s Friday Roundup for August 14, 2020!

This week Seattle-based Westland Distillery added a new whiskey series to its portfolio. Westland Outpost Range features whiskeys which highlight a central raw ingredient in single malt production with an emphasis on terroir. The first whiskey to debut is a familiar one; it’s the fifth edition of Garryana. These whiskeys are annual releases for the brand.

“We’ve been working on these projects, exploring the Pacific Northwest and its bounty, for years,” says Westland Co-Founder Matt Hofmann. “We’re thrilled to be finally introducing the Outpost Range to the world. With all three of these whiskies we step beyond what is known in single malt to pursue new possibilities. What we’re finding is beyond exciting and these whiskies stand as outposts on the edge of the unknown.” 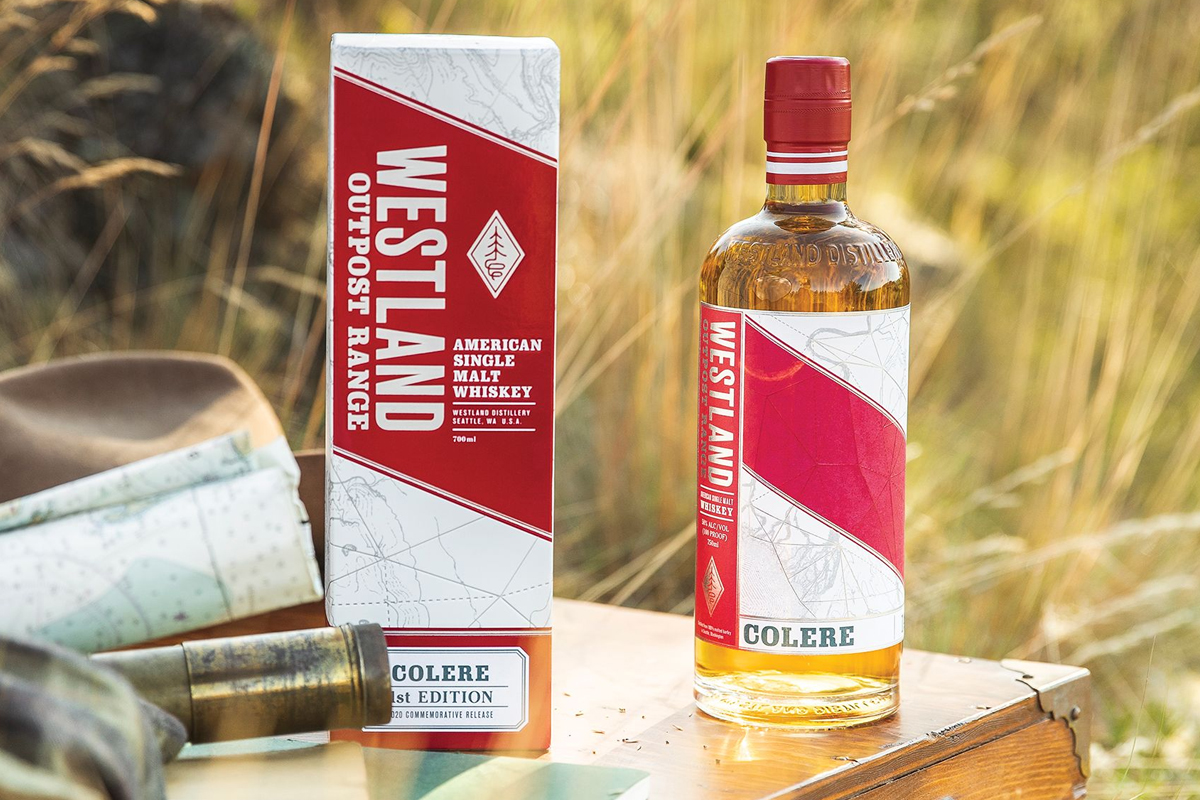 Garryana’s focus is the wood Westland uses in its production—Quercus garryana, a native species of oak from the Pacific Northwest. This Westland Outpost Range edition matures peated spirit in virgin Quercus garryana (36%) and the remainder in first-fill ex-bourbon Quercus Alba (American white oak). Furthermore, this year’s edition features the highest amount of garry oak to date. It will be available as of November 2020 with an SRP of $149.99.

Colere, which is Latin for “to cultivate,” puts its focus on the barley. In this case, the brand uses Alba, a six-row winter barley, in its production. Additionally, used casks are intentionally utilized for maturation. Second-fill Independent Stave Company Cooper’s Reserve barrels are used for 62% of maturation and first-fill ex-bourbon barrels are used for the remainder. Bottled at 50% ABV, this Westland Outpost Range edition is to arrive in spring 2021 with an SRP of $149.99.

Solum—Latin for soil—is an upcoming release which will feature locally-harvested peat. For years, Westland has been sourcing peat from a bog just 90 minutes from the distillery and have used it to malt barley in the Skagit Valley. The brand expects to release this Westland Outpost Range whiskey sometime in 2023.

The Whistler Cask Finish Series Debuts in the US

This month family-owned Boann Distillery is launching a Cask Finish series for its Irish whiskey brand called The Whistler. This follows the brand’s Trilogy Series which also debuted in the US earlier this year. 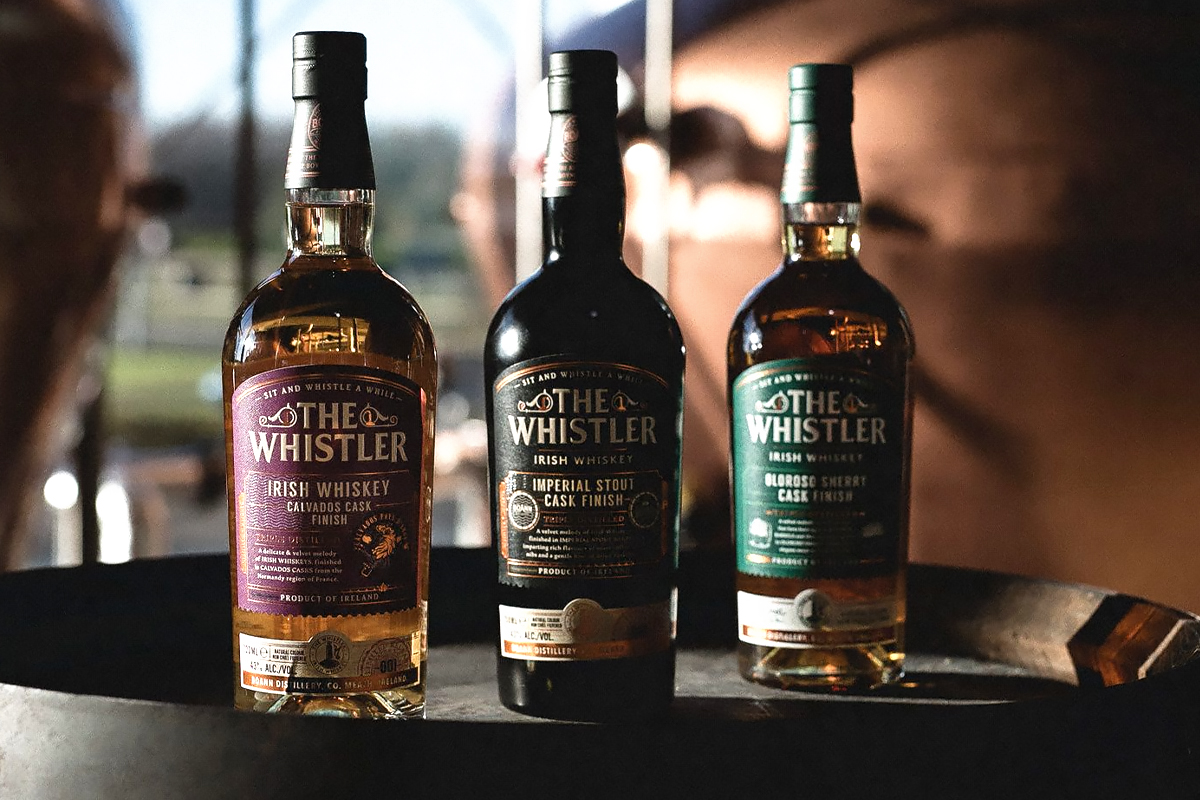 This triple-distilled blended whiskey features 35% single malt and 65% grain whiskeys. Each style individually matures in ex-bourbon barrels for 4 years before all marry and finish in oloroso sherry casks for 12 months. The whiskey is non-chill-filtered without added caramel and carries a 43% ABV. Its SRP is $34.99.

Like the Oloroso Sherry Cask Finish, this too is a triple-distilled blended whiskey which features 35% single malt and 65% grain whiskey. Each style is individually matures in ex-bourbon barrels for 4 years. Then the whiskeys marry and finish for 15 months in French oak casks which held 10-year-old Calvados from Chateau du Breuil. Finally, it is bottled without chill-filtration or added caramel at 43% ABV. It has an SRP of $39.99.

This whiskey was made in collaboration with Boyne Brewhouse. The whiskey itself is comprised of wheat whiskey (50%), malt whiskey 35%), and grain whiskey (15%), all individually aged in ex-bourbon barrels. The barrels used for finishing this blend were ex-sherry barrels which formerly held The Whistler Blue Note Whiskey. These barrels were dumped and then used by Boyne Brewhouse to age Imperial Stout for six months. After the beer aging, the barrels were then dumped and sent back to finish maturing this blend for six months. Bottled without chill-filtration or added caramel at 43% ABV, it has an SRP of $39.99.

This week The House of Angostura announced the launch the brand’s third bitters for the following the Orange Bitters launch in 2007. Angostura Cocoa Bitters is made with Trinitario cocoa nibs grown on the islands of Trinidad & Tobago among other botanicals. Like the others in the portfolio, the bitters is certified Kosher and 100% vegan. It arrives in the US in August 2020 and a 4 oz. bottle will retail for $8.99. 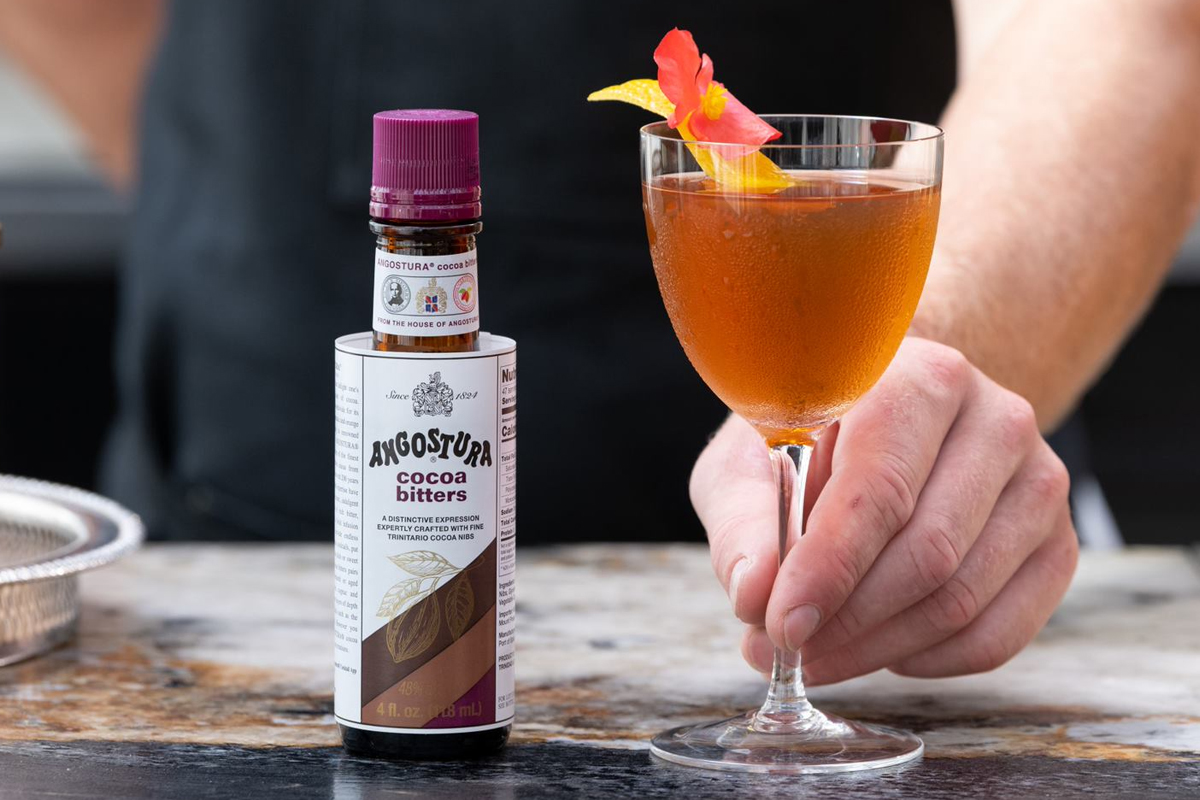 Rock Island is a blended malt brand from Douglas Laing which features peated single malts from the isles of Arran, Islay, Jura and Orkney. For Rock Island Sherry Edition, the single malt is finished in Spanish sherry butts for a period of time before bottling without chill-filtration or added coloring at 46.8% ABV. Available as of August 2020, it has an SRP of £45.99/$60. 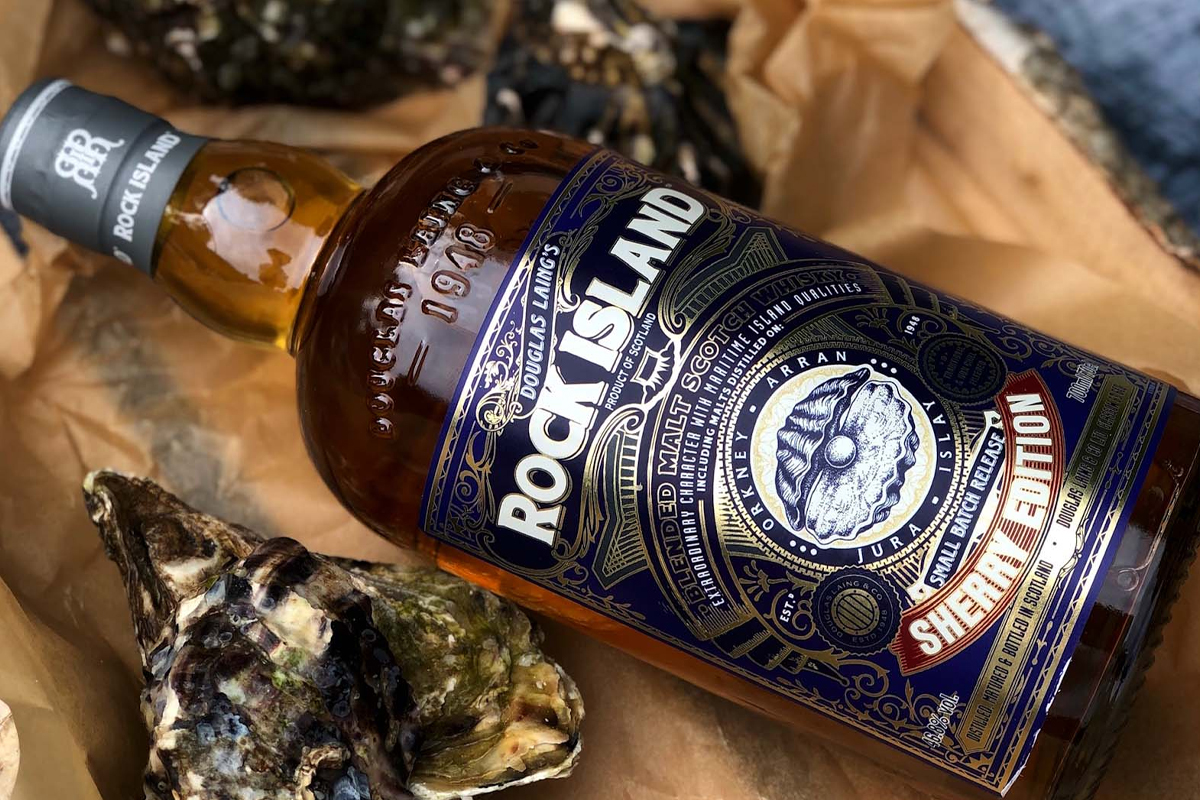 Owned by Ian Macleod Distillers, Smokehead is a Scotch whisky brand. Its flagship release is a peated single malt from an undisclosed Islay distillery. Smokehead Rum Rebel is finishes in Caribbean rum casks for a period of time before bottling at 46% ABV. Launched in August 2020, it has an SRP of £54.99/$70. 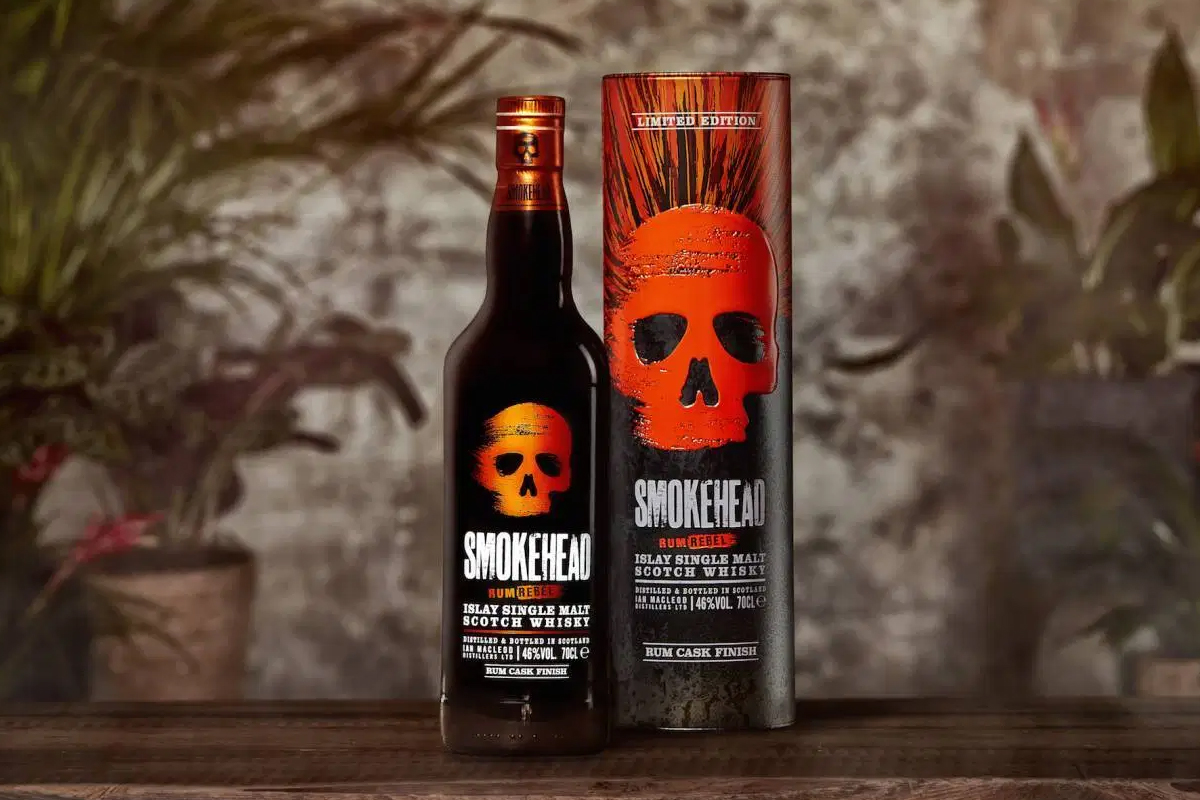 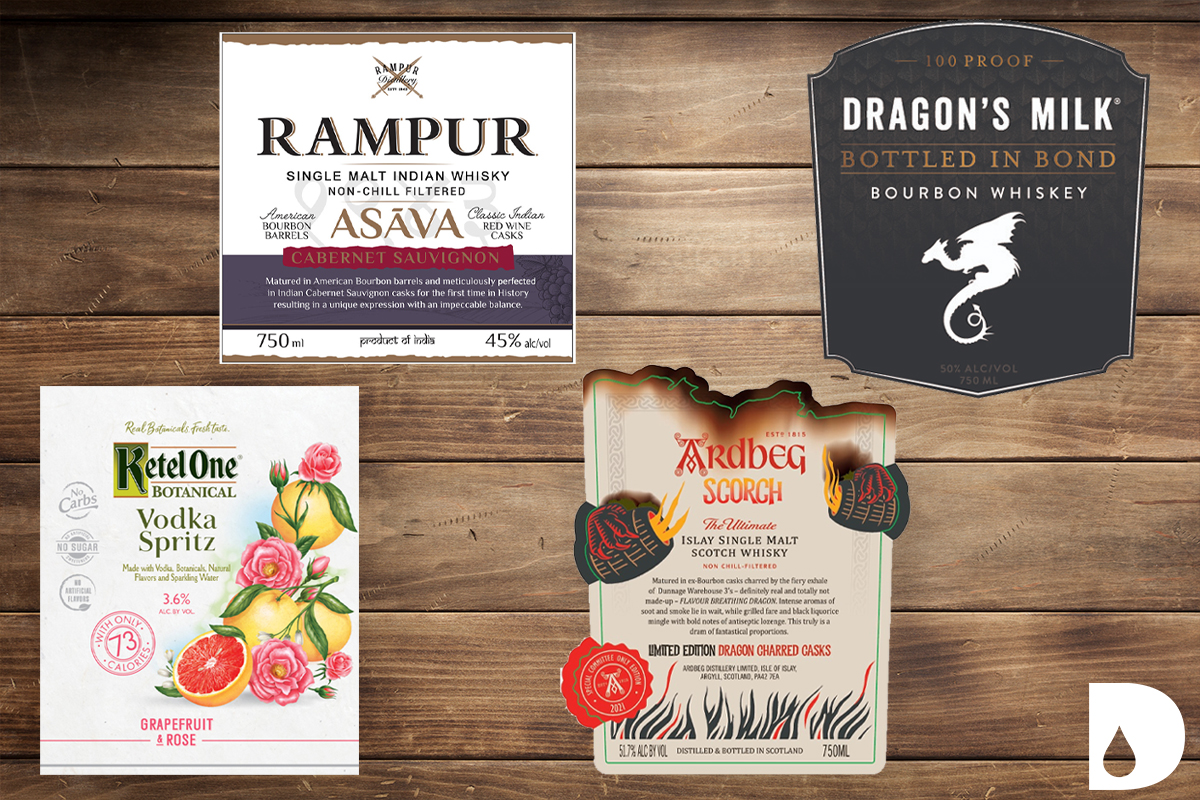 This bottling will be the Committee Release for 2021 which typically happens during Islay Fest. Past committee member releases have also been given a wider release about a month later with a slight reduction in ABV.

The single malt has matured in charred ex-bourbon barrels“dragon charred casks” according to the label. The back label of Ardbeg Scorch features their mascot Shortie sporting a shield and armor.

This upcoming single malt for the Indian distiller uses Indian cabernet sauvignon in its production, apparently a first for any brand.

This bourbon matures, at least in part, in barrels which held the brand’s own Dragon’s Milk Stout. However, it definitely follows the bottled in bond regulations. This includes being the product of one distilling season, aging for at least four years, and bottling at 50% ABV.

Following the launch of its Botanical spirits last year, Ketel One has taken those flavors and added sparking water to create ready-to-drink cocktails.

Each of the three flavors will carry a 3.6% ABV.

Getting ready for Bourbon Heritage Month with some exciting releases